The award-winning Mel Parsons is hitting the road this September to mark the release of her new single ‘Carry On’, out on August 20. 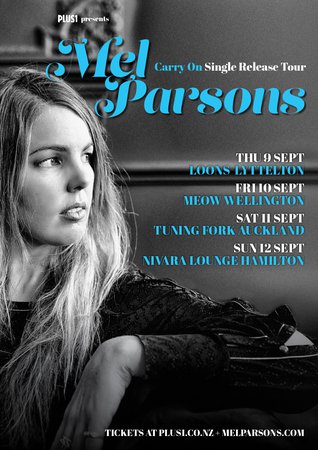 The moody new single ‘Carry On’ is the first since Parsons’ critically-acclaimed fourth album GLASS HEART, which earned her the award for ‘Best Folk Artist / Te Kaipuoro Taketake Toa at the 2020 Aotearoa Music Awards. The album was also a finalist for the 2019 Taite Music Prize and Top 20 finalist at 2019’s APRA Silver Scroll Award.

Produced in Ōtautahi at LOHO by Josh Logan, ‘Carry On’ is a hypnotic track showcasing Parsons’ trademark smoky vocals and lyrical prowess, backed by a stellar band of musicians led by multi-instrumentalist Logan.

The single lays the groundwork for the next exciting chapter for Lyttelton-based Parsons’, who has carved out a reputation as one of Aotearoa’s most beloved artists and without question, one of the country’s most compelling live acts. And audiences at these upcoming shows will be among the first to hear Parsons’ new music; alongside favourites from her esteemed back catalogue.

Parsons’ debut album OVER MY SHOULDER and her sophomore album RED GREY BLUE were both finalists for Folk Album of the Year (in 2009 and 2011, respectively). This is all in addition to her 2015 released album DRYLANDS, which spent 51 weeks in the Independent Music NZ Album charts and won a Tui for Best Engineer in the same year. The full-time touring artist also garnered a Silver Scroll finalist nod for ‘Get Out Alive’ in 2015 and the 2016 NZCMA Best Song for ‘Alberta Sun’.

Don’t miss the chance to celebrate the upcoming release of ‘Carry On’ this September.