Auckland singer-songwriter Miller Yule reveals a surprise new bonus track and fun video with ‘Just Like You’, a sweet pop-rock number to see out the year and bookend the release of his cracking debut album LET IT BURN. 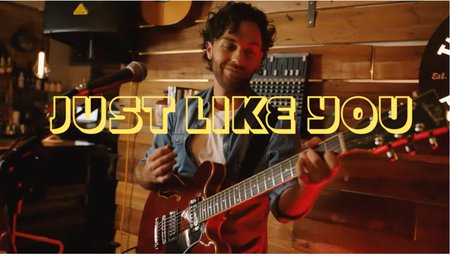 STREAM ACROSS ALL PLATFORMS

Following on from the successful release of Let It Burn, Miller quickly delivered a special acoustic version of album track ‘Hold On’ mashed-up with Coldplay’s hit ‘Fix You’, two songs weaved together seamlessly to reinforce an enduring and heartfelt message of resilience and hope.

Now Miller comes bearing more new music with the endearing, happy-go-lucky song ‘Just Like You’, wrapping up a musically fruitful and productive year for the multi-instrumentalist

For the light-hearted video, Miller once again called on the talents and skills of renowned director/producer Shae Sterling to bring his unique artistic and creative vision to the table.

As Miller had said, “I didn’t want ‘Just Like You’ to be a sad, lonely song, more an optimistic pursuit to find company”, Sterling decided to bring out Miller’s comical side by directing and editing up a cleverly constructed deep-fake video featuring the farcical adventures of many different ‘Millers’ out on the town one night.

‘Just Like You’ was recorded at Roundhead Studios in Auckland with Scott Seabright, mixed by Clint Murphy (UK), mastered by Ryan Smith (USA) and produced by himself and Greg Haver.

Miller says, ‘Just Like You’ is actually a song I’ve had lying around for quite a few years! It’s older than the other tracks on Let It Burn. I previously released a live version of it on my Miller Yule Live EP, as it was a song I had just written at the time and was testing out at my shows. It worked really well with the band live, so I decided I wanted to take it into the studio and eventually release it.”

His first studio album has been a long time coming for Miller, and with each and every single making up his latest body of work, it is evident how he has incrementally developed into a musically and lyrically strong, contemporary songwriter. His ability to deliver clever, hook-driven melodies and innate talent for excellent arrangements and insightful lyricism will undoubtedly continue to serve this accomplished artist well.

Now after a string of singles and his debut album being released this year, Miller is pleased to bring us a little end of year treat with this light-hearted and up-beat tune, ‘Just Like You’, another charming song from this maven of authentic Americana-styled pop-rock excellence.