After an amazing evening of entertainment from Julia Deans and Hollie Smith last Tuesday, this week it's about the dudes - or, at least Th' Dudes, The Bads, and many classic kiwi tracks & bands between our guests. 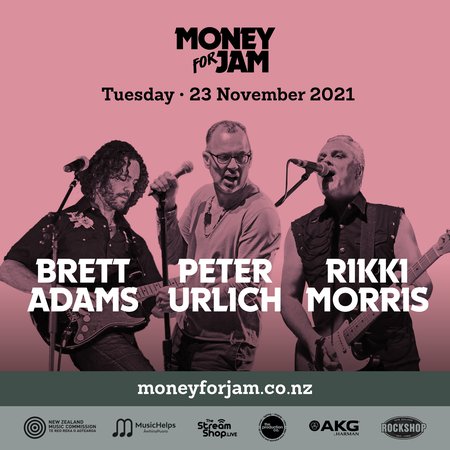 Musicians in Tāmaki Makaurau can't play shows, so Money for Jam is bringing artists together safely to collaborate for live streamed performances, every Tuesday, raising money and support for MusicHelps.

Watch the stream from 7:30pm on Tuesday 23 November at www.moneyforjam.co.nz

Peter Urlich has been up the front of a variety of musical endeavours over the years: Beginning by fronting Th' Dudes in the late 70's and 80's to becoming a DJ icon with Nice and Urlich, and of course not forgetting his role in the pop sensation that started as popstars and became True Bliss.

Peter will be joined by Rikki Morris who topped the charts in 1988 alongside his brother Ian (AKA Tex PIstol) with the single "Nobody Else". Rikki donned the guitar and filled in for his dear departed brother in last years th' Dudes final tour of NZ.

Joining Rikki and Peter will be former Mockers guitarist Brett Adams. As a gun for hire Brett has performed with many great New Zealand and international acts. Brett is a member of The Bads alongside his partner Dianne Swann.

If you missed last weeks amazing performance, you can still check out Hollie Smith & Julia Deans - featuring a special guest appearance by Jon Toogood - over at the Money For Jam website until the next Jam goes live.