Christchurch singer and songwriter Mousey has today released her debut full-length album LEMON LAW - a record all about “being let down and being a let down.” 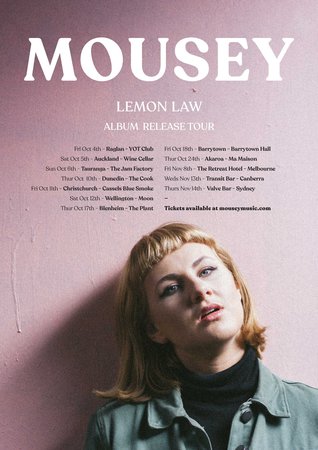 LEMON LAW includes the already released songs ‘Extreme Highs’, ‘Take Me To Harley Street’, ‘If You Really Loved Me’, ‘A Lifelong Pursuit’ and the new single ‘With No You’. Get LEMON LAW – iTunes / Apple / SpotifyDescribed by Mousey (AKA Sarena Close) as a “straight through the middle pop song about a break-up”, ‘With No You’ takes inspiration from Motown, Doo Wop, and even a touch of Kiwi indie-pop, to create the perfect summer tune. “I was listening to a lot of music from the 60s when I wrote this,” says Mousey.  “Lesley Gore, even Bobby Vinton. But then when I was recording it, I was listening to The Reduction Agents, and some of that came through as well.”

LEMON LAW marks a significant milestone for Mousey, whose star has been on the rise since the release of the album’s first single ‘Extreme Highs’, which earned her a nomination at this year’s APRA Silver Scrolls.

By design LEMON LAW defies genre: “There are so many different aspects sonically to this album,” says Mousey. “There are light Kiwi barbecue pop jams and also heart wrecking empty raw acoustic songs, plus a few sonic experiences thrown in the mix.” And it is this eclecticism, brought to life with a strong sense of melody and emotionally raw sincerity, which gives Mousey her own unique and quirky style. Even down to the album’s title.

“Lemon Law ia a real car law in the US,” she explains. “If a car has a substantial defect, covered by warranty, that occurs within a certain time after purchase, and continues to have the defect after a reasonable number of repair attempts then it qualifies for the Lemon Law where you can get a full refund.

“I found out about a different version of this law through one of my favourite TV shows How I Met Your Mother. Conceived by the character Barney, it's a rule introduced to avoid spending too long on a date that is going nowhere. The Lemon Law entitles either party on a date to call off the date within the first five minutes with no repercussions or hard feelings. Just cite Lemon Law and you're out.”

“The album is titled LEMON LAW because I feel there has been too many people in my world that would have preferred if I were someone else. I have constantly not felt good enough for family, friends, boyfriends, to band mates, bosses. I’ve felt that I’ve been a let down and if the people around me could refund me for a different person with no repercussions then they would.”

The album’s release also marks the start of Mousey’s first-ever Australasian tour, which kicks off in Raglan on October 4 and winds up in Akaroa on October 24. Get tickets for the tour HERE

Mousey will be accompanied by her band - Chris Close on drums; Dave Cloughleyon bass; and Terence O’Connor on guitar.