N.T. Honey is the musical project of Anya Henis, a musician and songwriter based in Tāmaki Makaurau. 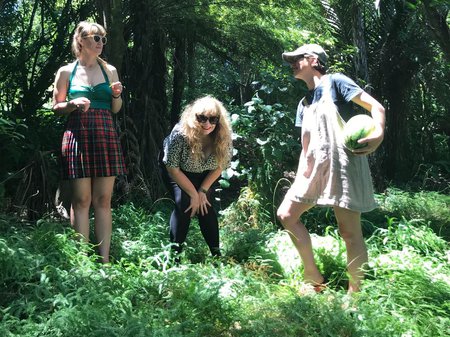 Their noise and jangly guitar brings alive narratives of feminine archetypes, environmental disasters and everyday phenomena. It's a sound that borrows from a range of influences such as Surf, D.I.Y., Garage and Folk music.

Run Away is the first single to be released from N. T. Honey's debut album Accidental Punk, and follows independently released solo EPs, 2018's N. T. Honey and 2019's Eat Them Before They Eat You. It's their first release on local imprint Sunreturn, and is due on April 23, 2021. Accidental Punk was recorded by Stefan Neville (Pumice), with help from her band, bassist Ducklingmonster (The Futurians) and drummer Jade Farley (Pumice, The Gladeyes).

The video for Run Away was made by Ralph Brown, Yoon Young Lee and Carmel Rowden. After being told multiple times by well-meaning skate dads to 'bend their legs', N. T. Honey and friends decided to head to Valonia Skatepark early, where they got to play their new song and even try out some new tricks before it got too serious. Run Awayshows that your mid-30's are the perfect time to finally conquer your fears while also reminding that it's ok to just leave it sometimes.