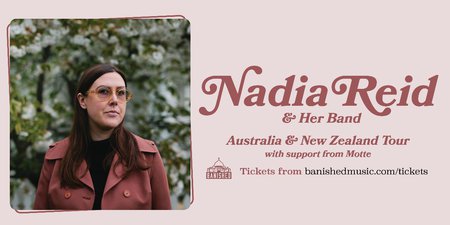 New Zealand-born, soon to be UK-based, Nadia Reid has attained global success off the back of her first two albums: Listen To Formation, Look For The Signs (2015) and Preservation (2017). Her prolific writing and touring have seen her present at some of the worlds most respected music platforms namely WOMAD (NZ), Green Man Festival (UK), End Of The Road Festival (UK) and a television appearance on BBC's 'Later...with Jools Holland'. Nadia was awarded #2 in Mojo Magazine for Album of the Year (for Preservation) and in New Zealand, she was a finalist for both the APRA Silver Scroll Awards (2017) and the Taite Music Prize (2016 & 2018).

With sell-out shows in Auckland, London, Melbourne and her home town of Port Chalmers, Dunedin, and, record three under her belt, it is clear that Nadia Reid is a rising star not to be missed. See Nadia & her band in a town near you. Nadia will be joined by Motte (Anita Clark) in Australia & New Zealand.

Tickets on sale from Banished Music