Kiwi indie-electro-pop genius GARETH THOMAS shares another new single from his upcoming album BITS, due for release September this year. A prolific purveyor of visually and sonically avant-garde pop tunes, Gareth once again delivers a D.I.Y-styled recording with his moody synthesizer ballad ‘WORDS THAT DON’T COME BACK’. 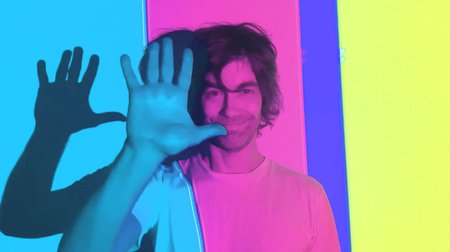 “’Words That Don’t Come Back’ is a song about that sinking feeling of regret, when you realise that you’ve said the wrong thing and can’t repair the damage”, says Gareth.

Written with his partner Amelia Murray (Fazerdaze), ‘Words That Don’t Come Back’ is an exquisitely produced track showcasing Gareth’s sensitive artistry. The minimalist approach in Gareth’s production leaves room for pregnant pauses capturing the weight of the moment when you know your words can’t be taken back.

With a rhythmical chord vamp inspired by The Cars song ‘Drive’, a steady U2 bass line, the song hovers around a pulsing kick drum that stutters into a palpitating heartbeat in its final moments.

“The video is an abstract contemplative drive down a freeway at night. Words pass like thoughts in the traffic. A disorienting mood with the road reflected in on itself as the journey evolves from the central horizon.”

Also set for release later this month, is a live version of the song recorded with his band at Roundhead Studio, with Jonathan Burgess on bass, and Joe McElhinney on drums.

“It is an intimate performance – in fact, it’s so intimate if you listen closely you can hear the clatter of the synthesiser keyboard. For this video, we performed synced in time to a projection of the music video, with visuals by Garth Badger of Thievery Studio.”

URCHASE / LISTEN TO ‘WORDS THAT DON’T COME BACK’ HERE

NEW ALBUM BITS DUE OUT SEPTEMBER 2021