As beacons in indie-pop, New Zealand's French for Rabbits are in a constant state of creation with their warm and nuanced content. Their music and accompanying videos are the results of the masterful storytelling that we expect from the group and the dynamic they've built together over nearly a decade. 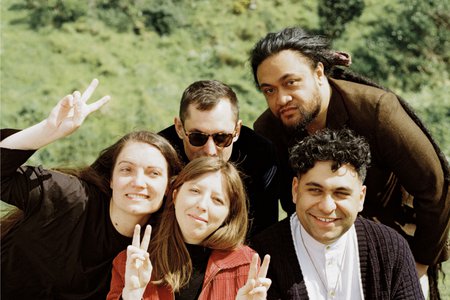 November 12 rings in the release of the group's third album, The Overflow. The fourth single, 'Walk the Desert' is the final taste of the highly anticipated album. "'Walk the Desert' is another song that fits into the canon of this album – it’s about big feelings, and trying to keep them contained. That feeling that if someone asks if you’re alright, you know you’d burst into tears," front-woman Brooke Singer explains of the emotive lyrics. 'Walk the Desert' is premium indie-pop, that Singer has proclaimed her pride in, "I think we’ve managed to create our biggest, most solid pop song, and I’m really proud of that."The accompanying video for 'Walk the Desert' brings you back into the world that's been built over the course of the album. The homely alternate realm sees Singer as a character, embodying her songs and inviting you in with her. Directing and editing was done by Martin Sagadin, with co-directing and production by Singer, and cinematography by Julian Vares."We filmed the music video for 'Walk the Desert' home mostly in one day, at home in and around Waikuku Beach...It turned out that rowing a boat and singing at the same time required more skill than I had...particularly with the tall in stature cinematographer Julian Vares sitting at the bow of the boat. Martin Sagadin managed to fall in and get drenched while directing," Singer laughed.

The Overflow is French For Rabbit’s ​​third album and elevates the band's music to new heights. The group weaves dark and ethereal tunes around folk-pop hooks in their most dazzling body of work to date.

Written and recorded mostly in 2020, the songs on The Overflow cover a wide range of relevant topics, with the common threads of introversion and anxiety woven throughout."The Overflow is our album for introverts and deep thinkers - it is sort of a constellation of all the different ways in which someone can be anxious.

"I'm worried about the future, wistful for the past, concerned about my friends and family, having social anxiety at parties, baffled by Donald Trump's presidency, loathing of social media and grieving the degradation of our environment. Sounds like a total downer...but I promise it isn't!"

Yet lyricist Brooke delineates that the album was made as an offering of comfort, "Perhaps it is more like a warm blanket. I'm really delighted with what we've made, very proud of our creation. I hope it finds its way into the right hands, and people give it a chance to sink it...I want people to listen to it loudly. Not quietly in the background...it's an album for introverts, but it isn't an introverted album."

The Overflow were recorded with NZ producer/musician Jol Mulholland (Tami Neilson, Neil Finn, Delaney Davidson, Troy Kingi) in Wellington at The Surgery and Auckland at The Lab, with mastering by Carl Saff in Chicago. The album follows on from their elegantly stated second LP The Weight of Melted Snow and their 2014 break-out "Spirits," which received millions of streams, and song placements everywhere from the 'Vampire Diaries' to Netflix’s 'Never Have I Ever' TV series.

Together, French For Rabbits have released three records to date - New Zealand Music Award-nominated EP Claimed by the Sea; their breakthrough Spirits, which received millions of streams, and song placements everywhere from the Vampire Diaries to Netflix’s Never Have I Ever TV series; and EP The Weight of Melted Snow.

They’ve toured in the US and Europe, opening for acts such as Lorde, Agnes Obel and performed at SXSW, Iceland Airwaves, WOMAD and in a castle for a fan’s wedding in Switzerland.

The album is set for release on November 12, 2021 via AAA Records (NZ/AUS), A Modest Proposal (Italy) and Reckless Yes (UK, ROW), and will be available on CD, digitally and on limited edition vinyl (UK: eco-vinyl, NZ: black and clear with pink swirls).