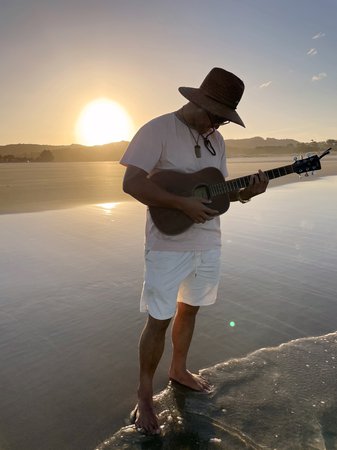 “With the entire album project, I wanted to make songs that express or show that things can be more than what they seem — just looking at the surface doesn’t give you the full picture,” says Taz (Ngāpuhi and Te Roroa).

Other songs on the album, including ‘Better Than Me’ and ‘Myself,’ deal with mental health, a topic that is important to the 27-year-old, who grew up in Kaipara, lives in Auckland, and works as a scaffolder and personal trainer by day.

“I’ve got a bit of a holistic approach to life,” says Taz. “You need to take care of the body, the mind, and the spirit for your personal well-being. I’ve had loved ones that have been through tough times and I want to create awareness for mental health.”

Taz wrote every song on the album, played the guitar parts, programmed the other instruments, and recorded and produced the album (with support from other Woodcut producers, including Tom Lee who mixed and mastered the album). The sound sits somewhere between the guitarist, pop singer styles of Jack Johnson and John Mayer, and the soulful Kiwi roots of Six60.

“I wanted to be able to play my music with a full band, so my music has become more natural and organic as I’ve gone on,” explains Taz. “This album definitely reflects this style development.”

Before this album, Taz released a few singles and regularly performed at pubs and festivals across greater Auckland. He was selected to perform at this month’s NZ On Air showcase and won the Mai FM Big Break in 2017 with his song ‘Think About You’.