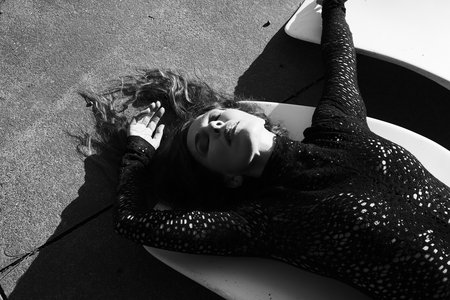 "New Zealand's next alt-folk sensation"  — ★★★★ Martin Aston, MOJO"If you're looking for an album which engages the mind and soul, or you want something you could listen to dozens of times and still find new hidden meanings, IRIS is outstanding."  — Round Magazine"Her new album, Iris, is full of understated and beautiful melodies"  — Graham Reid, New Zealand Listener "From the moment you press play it envelops you."  — Karl Pushmann, VIVA New Zealand Herald"The album is compulsively listenable, integrating both deft lightness and a darkness freighted with complexity and experimentation."  —  Anna Rankin, Metro Magazine

Recorded at Sublime Studios with co-producers Dave Khan and Simon Gooding, IRISis a reflection. Reb on writing the album, “I tried to catch the light refracting - the full saturation of suchness – and remain open to whatever emerged.  The space we found at Sublime and the tight-knit connection that we held was intricately woven into the fabric of IRIS during the writing, production and recording process. IRIS provided me an opportunity to speak my unspoken, to reflect what I have seen and experienced from within and to bear witness. These songs are a reminder of a map to a place we all know.  They are a vision of our past, a memory of our future and high beam headlights whether you’re behind the wheel or staring down the barrel of their glare.  They are a story of endless unrequited love and the hunt for tethering to a kindred spirit.”

Diving into the deeper meaning of the album’s namesake, Reb says, “Iris is in many ways an unsung hero, known as the goddess of the rainbow, sea and sky, she acts as bridge between the gods to humanity with little of her own story known. So many stories go unheard, so many aspects of our humanity are unsung; visibility is a contested and inequitable space where what is essential, and of beauty, is often ‘invisible’. I wanted and needed to give voice to this essential human spirit; to conjure and hold and commune with the very real, valid and invaluable voices within and around me.”

Reb also has today released the visual counterpart to this week's lead single, and title-track 'Iris'; the video directed and filmed by none other than Lola Fountain-Best.The namesake of her new album, Reb says on the single, “'Iris' is a love letter to my sisters and my many selves, an embrace that holds all the stories we never shared, a rainbow connection, a feminist arsenal, a space to rest, a prism for the heart. What’s in your heart that you dare not speak? If love be our currency, what stories we would tell?"

In May 2020, Reb Fountain released her self-titled album via Flying Nun Records to much critical acclaim. Reb Fountain won the 2021 Taite Music Prize, was shortlisted for the Silver Scroll award for her song ‘Don’t You Know Who I Am’, and the album Reb Fountain was nominated for five New Zealand Music Awards; Album of the Year, Best Alternative, Best Solo Artist, Best Album Artwork and Best Engineer.The award-winning songwriter, Reb Fountain, is a consummate recording artist and performer; spell-bounding audiences with her music and artistry alike. Throughout 2020, Reb and her all-star band astounded audiences around the country on her sold out album release tour, joined Crowded House on their 13 date, ‘To The Island Tour’, performed at Splore, and honoured the great Nick Cave at the sold-out Auckland Town Hall show, ‘The Boy Next Door’. Reb was born in San Francisco and immigrated with her family from North America to Lyttelton — the quiet port town out of Christchurch that’s been fundamental to New Zealand’s alt-folk scene, raising artists like Marlon Williams, Aldous Harding, andDelaney Davidson.