Rising New Zealand musician Princess Chelsea (a.k.a. Chelsea Nikkel) is proud to announce her brand new album The Great Cybernetic Depression, which will be released in New Zealand via Flying Nun/Lil' Chief on May 1st 2015. 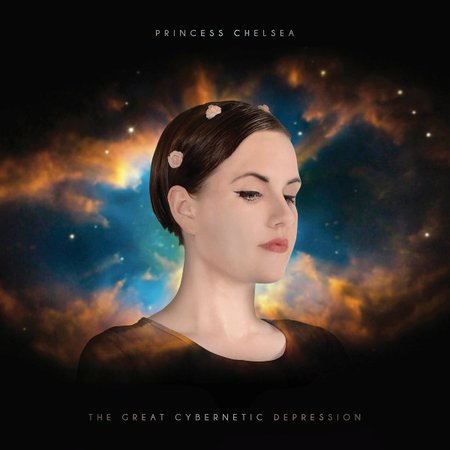 To celebrate the album release Princess Chelsea will be taking her band - comprised of the "three Js", all sound-men and multi-instrumentalist extraordinaires; Jackson Hobbs, Jonathan Pearce, Jonathan Bree - on the road in April and May:

Come catch Chelsea and band play a rare performance made up of brand new material and some old favourites - grab one of those few remaining black metal winston tees (the most hotly anticipated tee since gaywires dinosaur tee of the early 2000s).

Princess Chelsea and her band will then return to Europe and The United States in May for a three month tour. Keep an eye on the full list of dates here.

The Great Cybernetic Depression is awash with lush, expansive electronica sounds, lent added nuance by a darkly baroque flair, which draws upon her classical training. A significant space obsession is blended with wry, personal and sometimes mundane lyrics, creating a playful narrative on modern life delivered with deadpan drama.

Building upon the success of her debut album Lil Golden Book (2011), which spawned the hit "Cigarette Duet" (which has racked up nearly twenty million hits on Youtube), the new record is a sparkling, glittering epic, weaving layers of synths upon synths to create a magical universe. Influenced by 70s electronic music such as Kraftwerk, her style was described by Gorilla vs Bear as being "retrofuturistic". Part of the inspiration behind it was to try to recreate the magic of childhood sci-fi moves like Neverending Story.

"No Church on Sunday", the first single from the new album is an ambient stadium rock number with added fairy dust, it was written by a friend of hers Jamie-lee and deals with weird feelings after leaving a strict religious background. 'No Church On Sunday' was a radio hit in New Zealand, reaching #1 on bFM, RDU and Radio One and topping the Alt Radioscope charts for over a month.

To accompany it is this astonishingly surreal video, directed by Simon Ward. You can watch it here