Racing Releases Album MUST BE THE MOON

Aotearoa electro rockers Racing have today dropped their incredible sophomore album, MUST BE THE MOON. 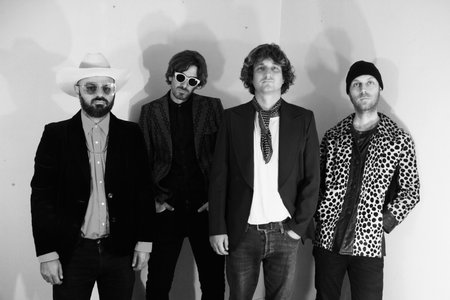 Listen HEREPacked with dirty grooves and cinematic choruses, MUST BE THE MOON was inspired by late-night adventures touring the provinces. Periods of introverted mental traversing combined with bursts of hedonistic touring inspired Racing to reach uncharted territories, with the 10-track LP featuring a new batch of heavy, yet danceable bangers.When asked to describe their new sound, lead singer Ed Knowles said “once again we’ve walked that line of being highly dramatic yet completely aloof, it’s serious but tongue-in-cheek, it’s heavy yet glam.”Recorded in Auckland’s Lab Studios and mixed by UK legend Dave Eringa (The Who, Manic Street Preachers), the album features a series of NZ music legends including Peter Ulrich (Th’ Dudes), Debbie Harwood, Matthias Jordan, Rikki Morris and Mauricio Miller. Lead singles ‘In Silver’ and ‘Southern Lovers’ set the scene for this uniquely antipodean musical adventure to unfold, with thundering bass and drums, sparkling guitars and soaring vocals resulting in a manic mix of mayhem and momentum. "The lunacy of the time, both internal and external, played a huge part in making MUST BE THE MOON,” says guitarist Sven Pettersen. “It stretches out to the giddy-heights of wild party tunes, all the way back to the isolation Prince-styled moon-blues. Moreover, when touring and trialling these songs, it became apparent they had an exorcising purpose, and our job was to capture that spirit.”MUST BE THE MOON features a series of double single releases, unveiled throughout 2022 as part of the group’s “Bang Bang Friday” campaign. Racing’s high-soaring, rock n’ roll banger ‘In Silver’ has so far spent 19 weeks in the Rock Airplay Charts, peaking at number three and showing no sign of slowing down.MUST BE THE MOON is Racing’s second self-produced album and follows on from 2018’s critically-acclaimed debut album REAL DANCING, from which three songs reached number one on the Rock Airplay charts – including smash hit ‘Run Wild’, which spent 50 weeks in the charts. To celebrate today’s album release, Racing are taking their epic live show out on the road for a national tour, culminating in the groups first ever headline slot at Auckland’s Powerstation on November 25. This upcoming tour undoubtedly marks Racing’s ascension to the next rung of the rock’n’roll ladder. Tickets available HEREAbsorb your senses in this explosive new record, and get your dance moves and binoculars ready for when the MUST BE THE MOON tour comes near you this summer.MUST BE THE MOON is available worldwide now.Listen HERE

MUST BE THE MOON tracklist: