Reb Fountain has returned with a brand new music video, this time in its purest live form. ‘Psyche’ - off her critically acclaimed new album IRIS - was recorded at Flying Nun’s 40th Anniversary Gala at the Auckland Town Hall. Those who were lucky enough to attend this event will know how incredible Rebs performance was. 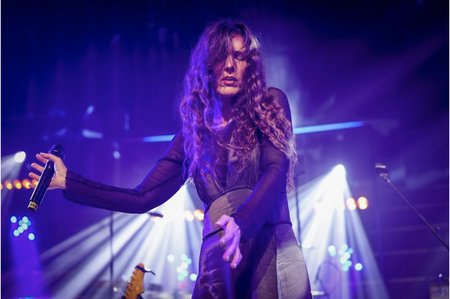 Says Reb, "Psyche was one of my muses for IRIS; a figurehead for my craft. Psyche’s tale is the story of our soul. Her hero's journey is a reflection of our human condition and the perfect framework for mapping our very personal voyage amidst covid, capitalism & climate change. I always loved writing essays and Psyche was penned in the same manner — exploring to the edge of the Earth and back; researching, note-taking, prose writing and refining until the parts become the whole. Psyche is the most reliable of narrators. Here’s to tall ships!"

‘Psyche’ — the film directed by Peter Bell, audio engineered by Tom Lynch, mixed by Simon Gooding and mastered by Chris Chetland. Made with the support of New Zealand on Air.

In October 2021, Reb Fountain released IRIS, her sophomore album via Flying Nun Records, to critical acclaim. Martin Aston from MOJO magazine called Reb "New Zealand's next alt-folk sensation", awarding IRIS 4 stars while New Zealand's Metro Magazineenthused "The album is compulsively listenable, integrating both deft lightness and a darkness freighted with complexity and experimentation." On release, IRIS debuted at #1 on the New Zealand Album Charts and #3 on the New Zealand Top 40 Album Charts.A perfect extension of her 2020 self-titled album, IRIS elevates Reb Fountain’s music to new heights. Here, Reb effortlessly combines pop elements with her trademark noir folk-punk sound, weaving authentic and anthemic tunes that create an instant and indelible impression."Her new album, Iris, is full of understated and beautiful melodies" - Graham Reid, New Zealand Listener. "From the moment you press play, it (IRIS) envelops you." — Karl Pushmann, VIVA New Zealand Herald.Her 2020 album Reb Fountain won the 2021 Taite Music Prize, was shortlisted for the Silver Scroll award for her song ‘Don’t You Know Who I Am', and the album Reb Fountain was nominated for five New Zealand Music Awards; Album of the Year, Best Alternative, Best Solo Artist, Best Album Artwork and Best Engineer.The award-winning songwriter, Reb Fountain, is a consummate recording artist and performer; spell-bounding audiences with her music and artistry alike. Throughout 2020, Reb and her all-star band astounded audiences around the country on her sold-out album release tour, joined Crowded House on their 13 date, ‘To The Island Tour’, performed at Splore, honoured the great Nick Cave at the sold-out Auckland Town Hall show, ‘The Boy Next Door', and knocked it out of the park at the Flying Nun 40th Anniversary gala. Reb Fountain is a star of our Aotearoa music scene.Reb was born in San Francisco and immigrated with her family from North America to Lyttelton — the quiet port town out of Christchurch that’s been fundamental to New Zealand’s alt-folk scene, raising artists like Marlon Williams, Aldous Harding, and Delaney Davidson.

The songs from IRIS will come to life in iconic New Zealand venues in February 2022. Reb and band - including Dave Khan, Earl Robertson, and Karin Canzek - have been astounding audiences around the country since the release of her criticality acclaimed, award-winning 2020 eponymous album.

Renowned for her spellbinding live performances, Reb’s IRIS tour is a show you don’t want to miss.

Book your passage, and join Reb Fountain and band for these exclusive performances, premiering her highly anticipated new album IRIS along with other favourite material.