Tonight, the winner of the 2021 Taite Music Prize which highlights outstanding New Zealand albums released in the past year was awarded to Reb Fountain for her critically praised self-titled album released on Flying Nun Records. 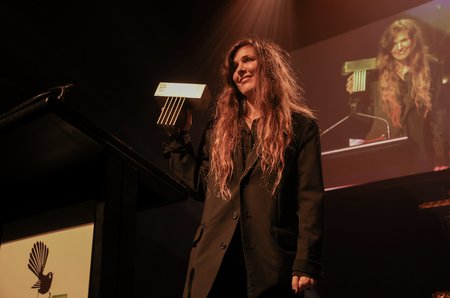 The Auckland Live Best Independent Debut went to Na Noise for their debut album Waiting For You released on the independent Tāmaki Makaurau label 1:12 Records.

The Independent Spirit Award was granted to Pete Rainey and Glenn Common of Smokefree Rockquest for their contribution to music through 33 years of motivating young musicians and helping them to develop their talent and creativity, musicianship, and performance skills.

Dylan Pellett, General Manager Independent Music New Zealand says, "It’s astounding to me that we can celebrate together tonight and show off the talented artists that live and create in Aotearoa. What a privilege to present this event on behalf of our membership and the wider music community. Top work everyone!"
The 2021Taite Music Prize was held at Q Theatre in Tāmaki Makaurau and featured performances by Troy Kingi, Patea Māori Club and Na Noise performing Reb Fountain’s song 'Faster' from the prize-winning album. The prestigious ceremony was hosted by 95bFM's Sarah Thomson with awards presented by Julia Deans and Anna Coddington. The event was attended by 400 industry, media, and artists from across the country and was a spectacular celebration of outstanding creative works made in Aotearoa.

2021 Taite Music Prize - Reb Fountain Reb Fountain is an award-winning songwriter, consummate recording artist, and performer; spell-bounding audiences with her music and artistry alike.  In May 2020, Reb Fountain released her self-titled album to critical and popular acclaim through iconic New Zealand label, Flying Nun Records. Reb Fountain's self-titled quickly sold out worldwide garnering favourable reviews and new fans both at home and abroad. Says Sarah Illingworth on the 2021 winner "Reb Fountain sees its eponymous creator at the top of her game – or perhaps preparing to climb to new and headier peaks. The album and Reb’s path to releasing it captures the independent spirit championed by the Taite Music Prize while sparkling with the high caliber of production and performance that makes an artist a star."Named after the late Dylan Taite, one of New Zealand’s most respected music journalists, the Taite Music Prize recognises outstanding creativity for an entire collection of music contained in one recording. Reb Fountain also received a cash prize of $12,500, thanks to founding partner Recorded Music NZ and supporting partner NZ Music Commission.

2021 Auckland Live Best Independent Debut - Na Noise Na Noise are the Thelma and Louise of modern DIY guitar-based music. They released their debut album 'Waiting For You' on 1:12 Records in November 2020. The long-time collaborators Hariet Ellis and Yolanda Fagan (both having worked together on BOZO, Vincent H.L, Echo Ohs and Thee Crockettes) have a rascally take on traditional song — with their new-old songs, the band introduce a new-old sound. Joined by multi-instrumentalist Christopher Varnham who provides organ, drums, and various other percussive elements, the three have cultivated a dark sound that is more carnivalesque than it is psychedelic.

Radio New Zealand's Charlotte Ryan comments "Na Noise captured me with their psychedelic, hypnotizing guitars and vocals. Their sound and vibe remind me of bands from the past, singing cool pop songs with warped vocals and dark sonic undertones. Their debut was impressive, I'm excited to see what they do next."

2021 Independent Spirit Award - Pete Rainey and Glenn Common of Smokefree RockquestThe two founders of Rockquest Promotions, Pete Rainey and Glenn Common, first met while working as high school teachers in Christchurch. In 1988 they entered some bands from their school into a performance competition that a local radio station was putting on. They saw the kids really responding to the opportunity to play contemporary music.

The following year the radio station was unable to put the event on again, so Pete and Glenn decided to run it themselves. They saw the benefit in a platform for high school students to play live on a professionally equipped stage, expressing their talent and creativity all while developing their musicianship and performance skills.

In 1990 the competition went nationwide. Pete and Glenn applied for funding from the Government,  which allowed them to roll out the competition out in 5 locations around the country - adding Auckland, Dunedin, Wellington, and Rotorua. The schools in the four new regions caught on really quickly, and it was at this moment they realised the competition could be big and sustainable in the long term.

Now with 40 gigs every year across the country, Smokefreerockquest has become New Zealand’s only nationwide, live, original music, youth event to give young musicians the opportunity to perform live in a professional setting, in venues from Whangarei to Invercargill. It has been a stepping stone for many of the country's most well-known and successful artists, contributing massively to the music community throughout Aotearoa.

Dylan Pellett, General Manager Independent Music New Zealand says “this award was a real blast for me - as I was performing in one of those Rockquest bands back in 1989!! So it felt really special to give something back to Pete and Glenn and acknowledge their contribution to the NZ music tapestry. And stoked that super-talented Julia Deans and Anna Coddington were on hand to present the award to them - amazing mahi!"

The Independent Spirit Award recognises and celebrates a New Zealander: someone who is passionate about NZ music; who's ahead of the game in creativity, diversity, and imagination; and has dedicated themself to helping artists and the wider music community to grow and find their own unique pathways. The annual recipient is determined by the IMNZ Board.

The 2021 award was granted to Patea Māori Club for their groundbreaking single 'Poi E'.Patea Māori Club’s 'Poi E’ lyrics were written by te reo advocate, linguist, and composer, Ngoi Pēwhairangi (QSM) and music by Dalvanius Prime in 1983, to encourage rangatahi to be proud of being Māori. A simple song with a catchy beat sung entirely in te reo Māori 'Poi E' has become Aotearoa’s unofficial national anthem, giving pride to generations of New Zealanders.

Recorded and released in late 1983, the single spent four weeks at number one and a further 22 weeks in the music charts, which was unprecedented for a song in te reo Māori. As well as being a sensation in Aotearoa, the Pātea Māori Club received international recognition - touring the United Kingdom in 1984, playing at the London Palladium, the Edinburgh Festival, and giving a Royal Command Performance. Top British contemporary music magazine of the time, New Musical Express (NME), named ‘Poi E’ its Single of the Week.

In 2010 ‘Poi E’ was used in Taika Waititi's hit movie, Boy. This saw the song back in the New Zealand music charts. A documentary on the song was released in 2016,  and in 2021 - 38 years after its release -  ‘Poi E’ is officially being acknowledged as an important part of our rich musical tapestry as the recipient of the 2021 IMNZ Classic Record.

The ten albums in contention for the 2021 prize included some of Aotearoa's finest musicians:

The three albums nominated for the 2021 Auckland Live Best Independent Debut Award were: