New Zealand born pop sensation Robinson has kicked off 2023 as she intends to continue - making a huge splash with her new single, ‘Oblivion’. 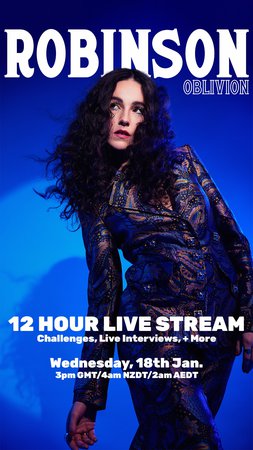 Listen HERE An absolute bop with killer pop hooks and melodies, and an irresistible driving beat, ‘Oblivion’ hits hard and fast. The song exudes an uplifting sense of hopefulness, which Robinson explains, also comes from a place that was once steeped in sadness.  “At the heart of ‘Oblivion’ is my own experience of losing my father when I was 11. I felt so much despair as I tried to accept the brutal reality that he was gone but through the darkness, about a year after his passing, I had the most vivid dream where he told me he would be with me through every walk of life. From that moment, a beautiful light surrounded me and suddenly I knew somewhere deep down that he would always be by my side.” Now based in London, Robinson teamed up with Charles Macdonald to write ‘Oblivion’ and says attention to detail in the production was vital.  “We were really particular about the instruments we used so it could portray these feelings in their truest form. The nylon guitar brings you the feeling of lightness/summer, the drums give you the constant energy to keep you moving and the underlying synths act as a lighthouse bringing you home and giving you waves of the deep meaning that run throughout the song.” ‘Oblivion’ will be on Robinson’s EP out later this year and she hopes it encapsulates the hope and healing she wants to share with others through her art. “I believe my mission is to help people get in touch with their inner selves and to recognise the universe that lies within each and every one of us.” Already the song is resonating with fans around the world, clocking up tens of thousands of streams in just a few days and sitting atop some hefty playlists. And for those rightly obsessed with the talented artist’s new banger, she’s hosting a 12-hour live stream on Instagram, TikTok and Twitch on Thursday, Jan 19, 4am to 4pm NZT where she’ll be listening to ‘Oblivion’ for 12 hours non-stop with special guests who will join Robinson throughout the event.  Robinson made her first big statement in 2018 with her sparkling pop gem ‘Nothing To Regret’ (certified Platinum in New Zealand and double Platinum in Australia). In 2020, she released her debut four-track EP WATCHING YOU. She was also invited to record her own take on ‘How Can I Resist Her’ by Split Enz for 2021’s TRUE COLOURS, NEW COLOURS tribute album.  A string of winning singles have followed, including 2022’s ‘Teenage Renegade’ and now, of course, ‘Oblivion’.