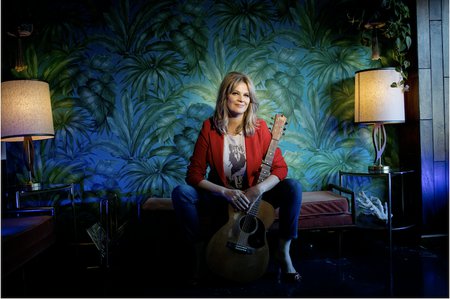 The song is the lead single for her fifth studio album, OUTSIDER, due to drop in Friday 4 March, and to be followed by a celebratory tour run of shows nationwide.

‘Livin’ For Love’ is a vibrant, funky fusion of Jackie Bristow’s musical influences, picked up over a long career and countless thousands of miles. Built on a foundation of earthy roots, a soulful groove and sophisticated, insistent rhythms, the song challenges priorities in a materialistic world.

In a chorus lyric, Jackie asks “are we livin’ for love, or digging the money, chasing the honey”, and answers her own question with an emphatic “I choose love”.

The idea for the song came during a discussion with a friend about their motivations in life. “We’re both artists and have embraced that life surrounded by people who resonate that same vibration”, Jackie says. “I personally have never made decisions based on the money, I guess in some ways it’s quite courageous. I’ve always followed my heart, and music has been my calling, a force that has taken me on an incredible journey. At the end of the day love conquers all, and choosing love for yourself and the world helps spread positivity and happiness.”

The video for ‘Livin’ For Love’ was shot in Auckland by Oscar Keys and produced in Los Angeles by New Zealand director Mark Tierney, formerly of seminal Kiwi band Strawpeople.

A native Southlander, Jackie was visiting family when COVID hit in March 2020, and has been unable to return to the USA since. Undeterred, she worked remotely with her Nashville team to complete the album, and to make plans to tour her homeland once more.

‘Livin’ For Love’ vocals were recorded in Auckland with highly-respected local producer and award-winning musician Rikki Morris, and the entire album was finished in Nashville with an ace line-up of musicians and Jackie’s long-time musical partner Mark Punch producing, mixing and playing guitar.

A seasoned and impressive performer, Jackie can’t wait to reconnect with her New Zealand audience once again when she finally hits the road with a national tour March/April to play the new tunes, and all the fan favourites!