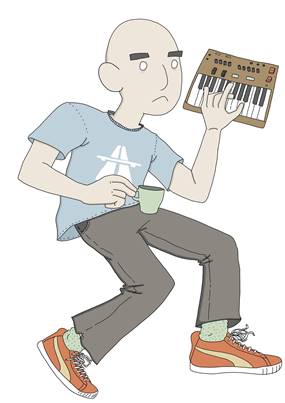 Inspired by The Residents' Commercial Album and the promise of never again having to agonise over a second verse, SJD has been experimenting with the distillation of many and various musickal flavours and textures into tiny songs both surprisingly shallow and deceptively deep. Running anywhere from 57 seconds to an indulgent minute-and-a-half, brevity is both the provocation and the prize. Nuggets of gold/nuggets of chicken. You'll eat the cake and all the candles and then line up for more.

Every Friday a new 'miniature' is released onto the various sociable medias and each with a bespoke video accompaniment. The recent "Brand Nu Car" has been winning fans from as far away as Howick/Pakuranga and features the eponymous SJD as a track-suited oddity making his way around town. Watch the video HERE.

The first EP of miniatures, cleverly entitled 'miniatures 1' is due for release in the digital domain on May 10th and contains 18 tiny treats to well and truly spoil your appetite for dinner.