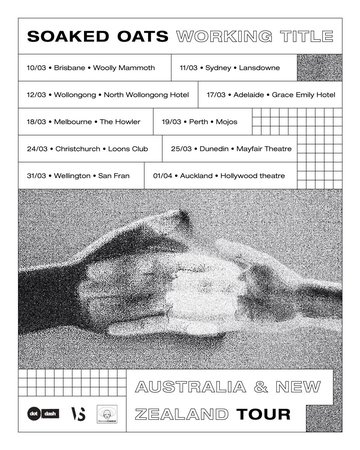 Light years beyond the band’s previous music about fruit, Working Title delves wider into the worlds of their beloved songwriters, drawing influences from funk, psychedelia, electronica and hip-hop to deliver their strongest piece of work yet.

Written and recorded over the last eighteen months, the New Zealand four-piece group’s first full-length album explores the contrasting ways we perceive and interact with the world, how we define ourselves through work, and the subtle shift from viewing objects in the world as fixed ‘things’, to experiencing them as processes and interactions unfolding.

Most of the recording took place in a community hall in the remote township of Okuru, Haast,  situated on the  West Coast of  New Zealand’s South Island, where the coastal road ends at the foot of Mt. Aspiring National Park. Partly in response to that isolated landscape, Working Title has unfolded as a more introspective offering from a band known for their cheerful sound.

Being a community hall in a small township, there was an open door policy and visitors were frequent, including a local school group, a Hare Krishna who had boyhood memories of the hall parties of yesteryear, and kind locals that would turn up with delicious freshly caught kaimoana/seafood. The visitors saw their beloved community hall transformed into a music studio with a blanket drum room and recording gear encircling the band. The gear was transported via multiple van-loads across the island in a five hour haul from the iconic recording studio, Chicks Hotel, in Port Chalmers, Otago.

CCTV cameras were placed inside the hall to capture the recording sessions as a document of the process. That “making of” footage can now be viewed on the band’s website:
soakedoatsband.com

Produced by Tom Healy (Tiny Ruins, Marlon Williams, The Chills), engineered by Tom Bell(David Kilgour and the Heavy Eights), and mastered by Christian Wright (Abbey Road Studios, Fontaines DC),  the album delves into new sonic territory, with inspiration coming from 60’s psychedelia and dance-rock among others.

Soaked Oats percolated into existence in Dunedin, New Zealand, in 2017. Catapulted by their fast-evolving songwriting chops, the band’s profile and fanbase are on the rise. The group have become known for endearing performances and live shows that have granted them access to tours and festival appearances throughout the UK, America and Australasia.

Having released a chapter of e.p.’s covering the important issues of Stoned Fruit (2017), No Slip Ups (2017) and Sludge Pop (2019),  the band were cooking with gas playing the bigger festivals, including The Great Escape, Laneway, Rhythm & Vines, and WOMAD.

Alongside a three-week tour of the U.S. in 2019, the band have been welcomed so warmly across the ditch in Australia – they’ve toured there five times, including their debut Big Sound performances in 2022.