Dark, heavy and cathartic; Sulfate paints a bleak picture of New Zealand with their wryly titled second album Godzone — out today via Flying Nun Records. Having already teased us with two singles, ‘Crossing’ and ‘There You Are!’, today marks the much anticipated moment we are able to hear the album in full. 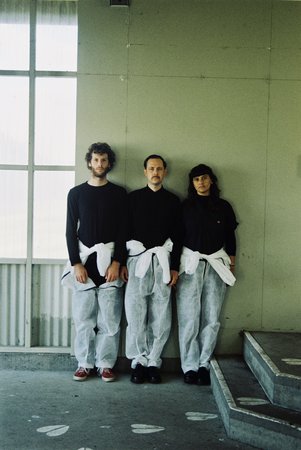 Sulfate began as the solo project of Peter Ruddell, known for his work with the noise-rock group Wax Chattels — who were nominated twice for the Taite Music Prize, as well as for Best Alternative Artist at the 2019 Aotearoa Music Awards. The solo endeavour of Sulfate quickly morphed into a two-piece band, with David Harris’ metronomic drumming proving integral to the sound of the group.From the inception of the band the ethos has always been to create intensity through restraint, and they developed a live reputation for “startling, sonorous… crushing yet considered”performances (AmbientLightBlog). Sonically, things develop slowly, creating an atmosphere and mood that “invades the subconscious” (Graham Reid) before the crushing noise sets in.Sulfate released their debut self-titled album in 2019 via Prison Tapes, setting out with the intention of making a truly DIY record. With their debut, the band reached #1 on multiple student radio stations, and completed two tours of New Zealand and a tour of Australia.It is with this foundation set that Sulfate created ‘Godzone’, an album written during the chaos of 2020, and recorded early 2021 at Ruddell’s home studio in Balmoral, Auckland. Hariet Ellis, who featured as a guest on ‘Bush’ on the debut record, has joined as a full-time band member, adding grinding, distorted bass guitar to the mix and with vocals featuring more prominently.

Drawing on influences from Bailterspace and Tropical Fuck Storm to Jóhann Jóhannsson and Earth, this sophomore album displays a natural progression from their self-titled debut. Sonically, Ruddell has been honing his production skills over the past two years, recording and mixing local acts Dick Move, Na Noise (both nominated for ‘Best Independent Debut’ at the Taite Music Awards) and Jazmine Mary. This has paid dividends, with ‘Godzone’ sounding more polished, yet retaining the DIY character of the first record.The thematic content of the record has its sights firmly set on New Zealand society. With “Bottle It In” we hear frustration over the pace of social change; in “Crossing”, how these desires for this change are not always followed through — instead we simply enjoy the scenery; and in the titular song “Godzone” Ruddell sings of the cognitive dissonance of many New Zealanders, and how we willfully ignore the effects our actions have on our surroundings as we go about or day-to-day lives. “Forgetting” echoes this sentiment, discussing how we often misremember facts and convince ourselves of alternative realities, be it deliberately or subconsciously, so as to not have to deal with consequences and face changing our behaviour. The promised ‘intensity through restraint’ ethos is present throughout the record. On “Forgetting” the mood is firmly set by the film-score-esque swirling textures before Ellis’ haunting vocals enter, and on “Only Half Awake” we hear a familiar funereal tempo, but this time with a screaming free-jazz tenor sax solo in the interlude sitting atop slow, grinding chords. Even when the tempos are increased we see this restraint present, such as the climactic chord in “There You Are!” being held for what seems to last an age, and the chordal movement of “Bottle It In” never rushing — embracing the hypnotism of the krautrock drum beat.On Godzone, Sulfate opens the door to the darker side of “God’s Own Country”; New Zealand — and is out now via Flying Nun Records.The trio have also recently announced new dates for their New Zealand album release tour, visiting Wellington, Auckland, Christchurch and Dunedin in October and November.