Today, indie two-piece Surf Friends make their welcome return with the announcement of their first full-length project in almost four years - Sonic Waves - out digitally and on CD March 17 2023 via Flying Nun Records. 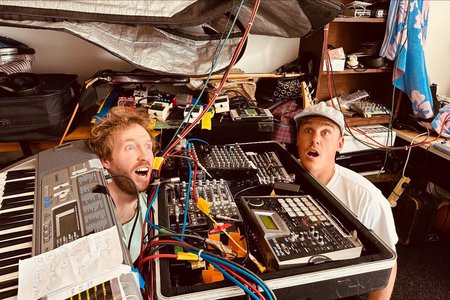 Sonic Waves sees the duo of Brad Coley and Peter Westmoreland joining forces with long-time producer, Mark Howden, to take on new musical directions, whilst retaining their dreamy psych-surf energy that put them on the musical map all the way back in 2009, when they debuted their self-titled EP. The album was mostly written and recorded between 2019-2021, and is their first full length release since their hypnotic 2019 offering, Doing Your Thing. Surf Friends say of Sonic Waves that “the focus of the record was to keep it raw and more distorted than previous releases. Most of the tracks’ guitars had separate channels recorded via a Peavey Rage 108 distortion amp - as a side note, Jeremy Toy (She’s So Rad, Leonard Charles, Sommerset) put this together like 25 years ago for Brad when he was his guitar teacher! Mark Howden also pushed us a bit in production, which was cool.”

To celebrate the announcement of Sonic Waves, Surf Friends have revealed the album’s first sun-drenched single, ‘Something Real’. From the sound of the song’s first strums, the dynamic duo take their listeners on a visceral sonic ride that embodies the weightless, euphoric feeling of hot summer days. The song is accompanied by a self-directed music video which perfectly captures the organic, carefree sentiment that the song emits, featuring Brad’s camping adventures with his kids and a few other bits of surfing footage.

“Something Real’ is essentially a realisation we had about doing “something real”. What we mean is that instead of falling into the traps of TV, social media, phone addiction etc, you should do “something real” with intent - like playing guitar, spending time with kids and listening to music - always keeping your inner kid alive.” - Surf Friends.

For a duo, Surf Friends sure know how to make an impressive amount of noise. The Auckland/Tāmaki-Makaurau-based two-piece, made up of Brad Coley (guitar, vocals, keys, harmonica, drum machine) and Peter Westmoreland (bass, keys, vocals), formed in 2009. Drawing inspirations from the jangle-pop of early Flying Nun bands such as The Clean, Surf Friends defined their distinct psych-surf and post-punk sound, using driving guitars, drum machines and synths loops to create a visceral, solar-powered wash of sound. Their 2010 debut album, Confusion, gained worldwide attention, Pitchfork praising their “off-the-cuff brilliance”. Over their almost fourteen-year career, they have performed and collaborated with the likes of Hamish and David Kilgour (The Clean), Nick Roughan (The Skeptics), The Black Watch and Snapper and have performed at festivals such as The Others Way, Psych Fest and Field Of Dreams. Surf Friends will once again be performing at Field of Dreams 2023 on February 18th 2023 alongside Arthur Ahbez, Te Huhu, Wellness and more.Sonic Waves will be available digitally, as well as on CD on March 17, 2023 via Flying Nun Records.