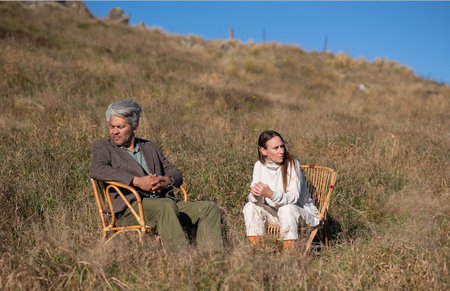 'Sunset Swimming' is a song about nostalgia, about remembering and how memories tend golden, while in the present it’s often our conflicts that come to the fore.

Matt Barus, one half of the band, says the song “comes with an image in my head of Te Rāpaki-o-Te Rakiwhakaputa, one of our favourite bays to swim at. It’s just over the Port Hills in Christchurch, through the tunnel. I’ve been going there for over twenty years. That’s a lot of accumulated memories, trekking over the path, with friends current and long gone. It’s got a grassy hill, like a small auditorium, that looks out over a sandy beach studded with pesky, sharp rocks. So many of our songs come from being by the water, we can’t keep the longing out of that.”

Lauren Mitchell and Matt Barus (Terrible Sons) have long been a part of the local musical landscape, previously releasing records with pop rock band the Dukes and performing in Aotearoa supergroup Fly My Pretties, alongside a variety of collaborative, performing and songwriting work.

This November and early December will be the duo’s first tour as Terrible Sons and audiences can expect stories, laughter, hopefully some tearing up and a baker’s dozen of songs. They’ll be joined in Te Ika-a-Māui by friend and singer songwriter Rodney Fisher (Goodshirt) and in Te Waipounamu by Hannah Everingham, fresh from releasing her wonderful debut single 'So Long Underground'. Full tour dates are below, with tickets on sale now at Undertheradar.