More of New Zealand gets the chance to experience all Th’ Dudes hits live with two more concert dates added today, to take Th’ Bliss Tour to an epic 12 date run. The Kiwi legends will play New Plymouth’s TSB Theatre on 16 November and Regent on Broadway in Palmerston North on 22 November. 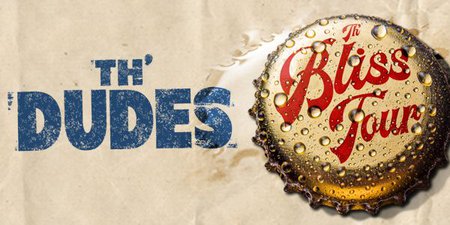 Tickets to the new concerts go on sale at Ticketek at midday on Tuesday 29 September. Remaining tickets to all other shows are on sale now via the usual ticketing agencies or eccles.co.nz.

Promoter Brent Eccles say the new dates are in response to pressure from fans who didn’t want to miss out.

"I'm not surprised that we have had to add more shows as New Zealand begins to realise this may the the last tour from this legendary band who can still rock the house better than most!” Eccles said.

New Plymouth and Palmerston North shows go on sale at midday on Tuesday 29 September via Ticketek. Remaining tickets to all other shows are on sale now via the usual ticketing agencies or eccles.co.nz.