The Bats have unveiled their final single ‘Gone To Ground’ from upcoming album Foothills — out November 13th via Flying Nun Records. 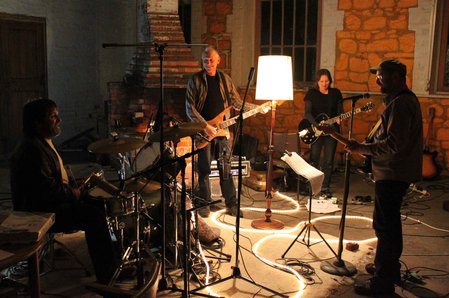 ‘Gone To Ground’ is a moving, moody song from the never-ending pen of Robert Scott and sees the band interpret and explore the paths we lead in life to consider where yours might take you. This single is a tune from the “before times” that seems strangely relevant now, seeing how we’ve all, for the most part, “gone to ground” and to many it can feel like “no one cares”. ‘Gone to Ground’ is generously served up with lashings of spooky EBow and a sense of soft reflection. Enjoy!

Robert Scott on ‘Gone To Ground’ — “Hide and seek, do we want to be found.... maybe not. Many people have gone to ground in these tricky times. A slight sense of unease pervades the song with the spooky strains of an E bow filtering through the trees. You could walk the marshes and go far. It's funny how you can draw connections between fictitious tales and present day life.”

Sports Team's mysterious video — premiered by Brooklyn Vegan —leaves interpretation up to the viewer and features visual references from The Bats’ rich past.Annabel Kean has said on the ‘Gone To Ground’ video, “This is by far the longest we’ve spent on a video. We started about a year ago when we heard an early mix of the song, but the discovery of perpetual motion by way of spinning veges really opened a can of worms. Then it took us three attempts to pluck up the courage to light a guitar on fire.” Co-director Callum Devlin adds, “It was a total collaboration, and a very instinctive process. We wanted to try and capture what we felt listening to the song. There’s an uncertainty and a mystery to the lyrics that I feel lead us somewhere a bit more conceptual.”

Spanning the last 38 years, The Bats have now clocked ten incredible albums; each one seeing the band evolve with new material from the prolific songwriting hand of Robert Scott —and their upcoming Foothills is no exception. Add to that tally the extra singles, b-sides, EPs, compilations and tribute songs they’ve recorded, creating a succinct setlist is a nearly impossible task.

Foothills was recorded in Spring 2018 at a country retreat pop-up studio. At that time, 15 songs were captured and immortalised in the Canterbury foothills of the Southern Alps, Aotearoa (New Zealand). Only too well, The Bats know the possibilities, potentialities and sonic vistas that arise when one takes the reins for the recording process in a beautiful place that’s on home turf. Robert Scott, on the making of Foothills has said “Time marches on... finally, we found a gap in our busy lives and chose a week to convene. We found a house that is usually inhabited by ski field workers — Kowai Bush, near Springfield about an hour west of Christchurch and of course nestled in the foothills of the mighty Southern Alps. The songs had been written, demo’d and arranged for some time, but still with a little room for trying things out in the studio. Many carloads arrived at the house, full of amps guitars and recording gear, we set up camp and soon made it feel like home; coloured lights, a log fire, and home cooked meals in the kitchen. We worked fast, and within a few days had all the basic backing tracks done, live together in one room, the way we like to do it - it’s all about ‘the feel’ for songs like ours.”