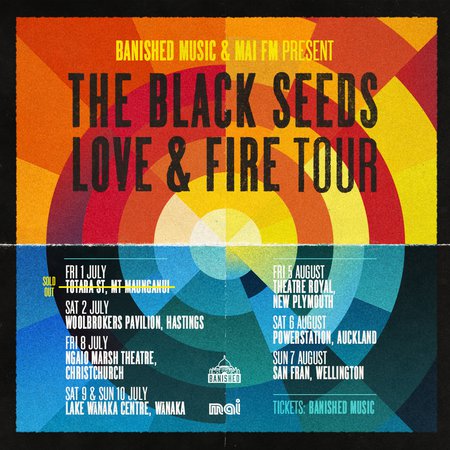 This carefully crafted 10-track album is a “big slice of The Black Seeds’ love and musical heat.” Featuring previously released singles, ‘It’s So Real’, ‘Bring The Sun’, ‘Let The Sunshine Through’, ‘Raised With Love’ and the most recent, ‘Game Over’ - LOVE & FIRE also has four new tracks that are set to hit just as hard!

The title track ‘Love & Fire’, also the focus track with the album release, came about following the online purchase of a prized vintage synthesiser by keyboardist Nigel Patterson, who describes the track as a winning combo of authentic keyboard and synthesiser tones, coupled with a fat rhythm from Jarney Murphy and a killer vocal from Barnaby Weir.

‘Non Justice’ is the contribution of bass player and “legend in the Aotearoa roots scene” Francis Simeon Bassie. The Black Seeds’ Barnaby Weir’s lyrics capture the essence of the music, making a conscious statement that touches on issues of justice, inequality and isolation.

‘Greatest Expectations’ is a gentle uplifting track perfect for those hot summer days, with some wispy organ from Patterson and a layer of “ear candy” paired with classy horn lines from Barret Hocking and Matthew Benton.

‘Mediation’ has a great vocal by Daniel Weetman, supported by a heavyweight band rhythm. This track showcases the band's versatility as it moves effortlessly from upbeat dancefloor tracks to heavier more conscious material.

Alongside the album, the band kicks off their nationwide tour on July 1 with a sold-out show at Mount Maunganui, then onto Hastings on July 2. The tour then travels to the South Island for gigs in Christchurch on July 8; a sold-out Wānaka on July 9, and a second Wānaka gig on July 10. The band then return to the North Island for their rescheduled dates with New Plymouth on August 5; Auckland on August 6 and then a hometown Wellington show on August 7 to end the tour.

LOVE & FIRE began with jams and demos at The Surgery in Wellington, NZ, back in mid-2018, resulting in a “huge collection of ideas and song demos that were to be refined over the next two years to become LOVE & FIRE,” says lead singer, Weir.

Originally planned as a classic ‘band-in-a-room’ recording, like many other creative projects, the album took an unexpected turn with the arrival of Covid to New Zealand. Lockdowns saw studio sessions cancelled and bandmates unable to gather - resulting in a lot of zoom-based creativity. Weir and keyboardist Nigel Patterson’sstudios became the hubs for pulling everything together.

“Ideally, each member sent in one or two takes of what they were feeling they wanted to add to the track, and this worked well. In some ways – without being together gave the lads that creative mind space to lay down something meaningful,” says Weir.

LOVE & FIRE is a skilfully woven album of soul, dub, roots, reggae, funk, Afrobeat and other elements brought together by well-honed musicianship and production - in other words, The Black Seeds! Don’t miss the chance to see The Black Seedsperform these new tracks live, alongside all their iconic hits, with the nationwide tour.

General tickets for all shows on sale HERE