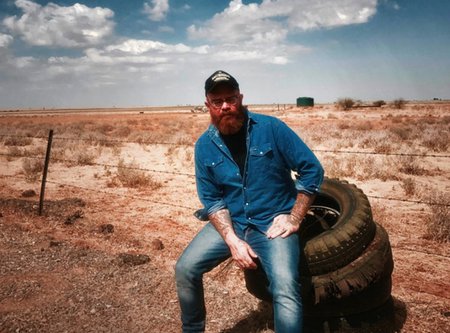 Lead singer and songwriter from "mythical mongrel Christchurch folk/country band" The Easter returns to the Tuning Fork this June.

Adam will be joined by a small backing band made up of players from The Eastern who call themselves The Roaring Days.

Described by influential country magazine No Depression as "One of the best modern roots acts from any country period", by the NZ Herald as "NZ's toughest-minded songwriter" and by Radio NZ National as a "National Treasure", an Adam McGrath show is primed and proud to reach your heart, head and boots.

Confused when he drives into Auckland by the traffic and the volume of everything, he always leaves lifted by the people who show up who let him know that the big city can be as intimate and community-focused as anywhere else in the country. Having shown up on the Tuning Fork stage more than a few times, he knows what a hub it's been for folk-country music, and feels both privileged and excited to get up for another round.

This time he'll be joined in support by Australian Claire Anne Taylor and local poet Hadassah Grace, as well as a small backing band made up of players from The Eastern who insist on calling themselves The Roaring Days.

McGrath presents as a folk singer in the truest, traditional sense, but one whose songs speak to the times we find ourselves in and the people with whom we share them with. McGrath has spent a virtual lifetime on the road in NZ and everywhere beyond. He sees it as his job to pick up the stories he finds, siphon them down to the bone and bring them to the next location.

Adam has toured and played with everyone from Fleetwood Mac to Steve Earle to Paul Kelly to Old Crow Medicine Show and many, many more. Barry Saunders from The Warratahs simply described him as "the truth".

A people's player with a blue-collar work ethic, McGrath treats any opportunity to play, big or small, as a gift which he intends to earn. He always looks forward to returning to the road, especially after his last well-received run last spring. McGrath says "somewhere between Waimamaku and Bluff, just over there on the left side of the road, that's where things tend to make the most sense". He hopes friends of both The Eastern and his solo work will make it to the shows, in part so he can keep the truck gassed and the rent paid, but mostly so both him and his audience can feel (at least for a couple of hours) that they aren't alone in this mixed-up, shook-up, weird-ass place we inhabit together.

Tickets on sale now from Ticketmaster.