The ‘peeping-tom rom-com’, HOW TO MEET GIRLS FROM A DISTANCE is thrilled to continue its success with the release of the soundtrack to the movie. Featuring indie favourites The Eversons, The Broadsides, Matt Langley, Leno Lovecraft, Joe Blossom and Uni and her Ukulele to name just a few, the soundtrack is upbeat and perfect for summer. 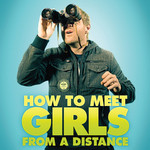 Digital only release available on Amplifier and Itunes

As eclectic and offbeat as the film, the HOW TO MEET GIRLS FROM A DISTANCE soundtrack moves from lo-fi surf rock to indie anthems. It's a treasure trove of New Zealand music from Dunedin to Auckland and everywhere inbetween.

HOW TO MEET GIRLS FROM A DISTANCE is the first film to be made under the Make My Movie banner - a joint project from the NZ Film Commission and NZ On Air. The winning entry Traces Of Nut received $100,000 and support from one of NZ's top indie producers, Ant Timpson. The result is a film that exceeded expectations by selling out at the New Zealand International Film Festival, gaining a general cinematic release and 4 star reviews from The Listener, TVNZ, NZ Herald and Yahoo.

Richard Falkner who plays the lead part of Toby in the film, worked with Julie Warmington on the soundtrack to the film. Richard was also involved in creating the incidental music with Tane Upjohn-Beaston.

The songs on the soundtrack fitted quite naturally with the quirky nature of the film.

The Eversons are four guys from Wellington; making geeky pop music that is heavy on four part harmonies, dry wit and guitars. They lent their songs ‘Creepy' and ‘Marriage' to the film, which can also be found on their debut album ‘Summer Feeling.'

The opening track to the movie is by The Broadsides who are a band from Auckland, formed in 2009. Their music is a unique brew of finely distilled outlaw country, rockabilly, bluegrass, gypsy and rock n' roll.

James Lee Fu are from Wellington and contributed two tracks on the soundtrack ‘The Bomb' and ‘Killa Monsta Beautiful (Radiate)'.

Matt Langley is an APRA Award winning and critically acclaimed New Zealand singer-songwriter. His latest release Featherbones features the track 7.13, which took out the 2010 APRA Country Song of the Year award. ‘I Think We Would Make A Great Mistake' can be found on his EP Bijoux Studio Sessions.

Cheap Fakes are a five-piece band whose sound is predominantly steeped in off beat guitars and catchy melodies, theband have been performing their fusion of funk, pop, ska, reggae and dance music since 2009.

Tiddabades were a Wellington band that split up in 2011 but reformed with some of the original members to form theglorious Sunken Seas.

Thee Mysterious Tape Men are, as the name would suggest, half man and half tape. They play ‘Esoteric Surf Trash' and are currently based in Christchurch where they play as the trio Planet of the Tapes.

Mr Hayday is James Hayday, an Auckland based musician with a love of hip-hop and electronica. His original sound is an experimental blend of electro, pop and layered beats that sounds like a dirtier version of Jean Jarre.

Influenced by the melodic lines of early JJ Cale and Neil Young The Outlaws released their debut album ‘The Price of Gum' in 2010 which received critical 5 star acclaim. Jessie James and The Outlaws are a revolving band of Wellington musicians with a style best described as folk with a psychedelic bent.

Rosy Tin Tea Caddy is Wellington folk duo, Holly Jane Ewens and Andy Hummel working under the alter egos Betty Grey and Billy Earl. The character Tamsin Moran is also played by Holly. With a voice that sounds like whiskey served in a crystal glass she gave goose bumps on the film set.

Uni and her Ukulele is Heather Marie Ellison. She has released three full albums, numerous E.P's, collaborations and a covers album ranging from lo - fi indie pop to melodic strings to rock. Uni's sound is not your usual ukulele fare, her music has been described as eclectic, infectious pop. Based in San Francisco for most of the year, Kiwi's have semi-adopted her due to her frequent visits here.

Wellington based Joe Blossom is described by some as a renaissance man and an exponent of sonic piano pop. His influences are the Top 40 songs he heard on the cowshed radio as a kid, and the shimmering tones of the bands on legendary New Zealand indielabel Flying Nun.

1.The Broadsides - What's Your Name

6.Jesse James and the Outlaws - Angila

16. Uni and her Ukulele - Tell Me That My World Is Pink, Not Blue