For one night only, The Others Way Festival will take over Tāmaki Makaurau's Karangahape Road district this September for Auckland's most exciting music festival, and street party of the year! 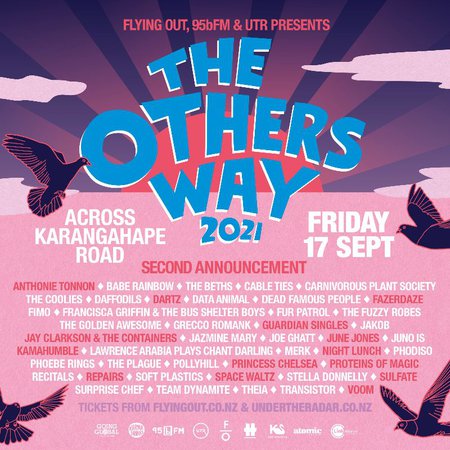 Tickets are moving fast, and with these 14 new acts announced today, don't expect them to stick around for long. Reforming for the 2021 festival is the original line up of the 70s glam-rock band Space Waltz and one of Aotearoa's most powerful psychedelic, dream-pop artists of the decade Fazerdaze.  The line-up features electronic folk artist Anthonie Tonnon, fan favourites, eclectic pop-star Princess Chelsea and fuzz-pop heartbreakers Voom.Making their way to Auckland from Ōtepoti Flying Nun alum Jay Clarkson and the Ōtepoti all stars The Containers, and drum and double stringed diddley bow iconic duo Night Lunch.Recently returned multi-instrumentalist and unique multi-format artist Proteins of Magic, and the dark, heavy and cathartic three piece Sulfate will perform alongside jangly post-punk super-group Guardian Singles, infectiously fun Pōneke punk pals DARTZ, high energy and playful rapper Kamahumble and Tāmaki Makaurau's post-punk trio Repairs.These 14 artists will be joining the 2021 festival line-up alongside the previously announced beloved indie heroes, The Beths, returning to their spiritual home for a very special headline performance. Lawrence Arabia will be performing his Taite-award winning classic album, Chant Darling (which is also being reissued on vinyl for the first time ahead of the festival). And, another legendary NZ band Fur Patrol will be returning to the stage for the first time in a long time - hot off the heels of their 20th anniversary re-issue of Pet. The September 17 festival will also feature some familiar names; The Coolies, once described by Sonic Youth's Thurston Moore as "punk no-wave sonic heartstring buzzing clatter rock n roll". The 1980s Flying Nun indie-pop band Dead Famous People, and Francisca Griffin of Look Blue Go Purple fame, with her band The Bus Shelter Boys. Plus award-winning, instrumental post-rock band Jakob, and Auckland’s first theatrical/political punk band from the 70s' The Plague.Post-punk band Daffodils join the line-up, along with, lush orchestral jazz group, Carnivorous Plant Society, electronic-punk-rockers Grecco Romank, bold and edgy alt-pop artist Theia, dream pop project Phoebe Rings, and hip hop trio Team Dynamite.Celebrated acts from all corners of Aotearoa are set to perform, Ōtautahi heavy psych-rockers The Fuzzy Robes and Ōtepoti's lavish psych-pop artist Juno Is. While from Pōneke, reformed loud shoegaze 4-piece The Golden Awesome are joined by dream-fuzz group Transistor, and garage-rock trio Soft Plastics. Up and coming local acts will make a welcome appearance, techno/rock'n’roll group Data Animal, and dream-folk artist, Jazmine Mary plus Pollyhill with their hypnotic beats and witty raps, and musician, rapper and percussionist Phodiso are among the artists set to wow.Delve deeper into these artists and get yourselves familiar with the talent performing The Others Way Festival 2021.

Flying Out is thrilled to confirm that the beloved music festival The Others Way, will return on Friday, 17th September.The 2021 edition of the boutique multi-venue music festival will once again be held across the Karangahape Road precinct and will feature some of Aotearoa's best emerging and established musical stars. As the festival line-up is revealed in the coming weeks, music fans can expect bigger and better with new venues, additional stages and a few surprises set to delight!The Others Way has become a keystone event on the late winter calendar for music lovers, as well as one of the busiest nights of the year for Auckland's treasured musical hub, Karangahape Road. Every year, the festival has sold out a testament to Aotearoa's world-class independent live music scene and its passionate community. "The 2021 festival is a chance for us all to get together and celebrate New Zealand music and celebrate the ability that we can put this on again after the disappointing cancellation of the 2020 festival." - Matthew Davis, Flying Out.

For more information on THE OTHERS WAY, visit: