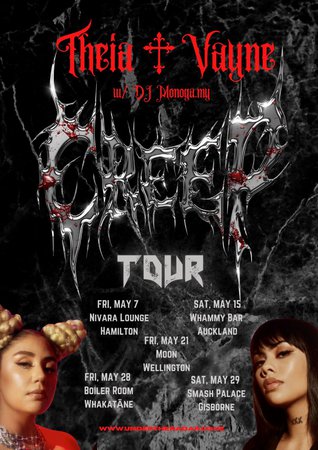 ‘CREEP’ combines Theia’s big experimental pop energy with Vayne’s distinctive hip-hop sound to create a bass-heavy, powerful waiata, which bravely tackles the serious issue of sexual predators and those who protect them through silence.

After performing ‘CREEP’ together at festivals over summer and feeling the ihi (excitement, power) from crowds, Theia and Vayne wanted to capture some of the energy in an official music video. So, they took to social media to invite fans along to K Road’s G.A.Y club just before opening on a Friday night and enlisted one of NZ’s best young videographers, Connor Pritchard, to film the magic.

The end result is a gritty, highly charged clip, which illustrates the power of the song and shines a spotlight on the combined wairua of two of Aotearoa’s most formidable artists, who deliver a spine-tingling haka as the finale.

They say videos no longer hold your attention for more than 30 seconds but this is one music video you will want to watch until the end!

Theia and Vayne are also taking ‘CREEP’ on the road this May with a five-date Aotearoa tour. DJ Monoga.my - a rising star on Tamaki Mākaurau’s queer scene and also Theia’s DJ - will join the tour to play their own set. Special guests will also be announced in the coming weeks so watch this space!

Get tickets for the Theia x Vayne CREEP tour 2021 HERE