It’s the spooky season and New Zealand’s very own queen of alt-pop Theia is getting into the spirit with her Halloween-inspired track, ‘Freak’. Listen here. 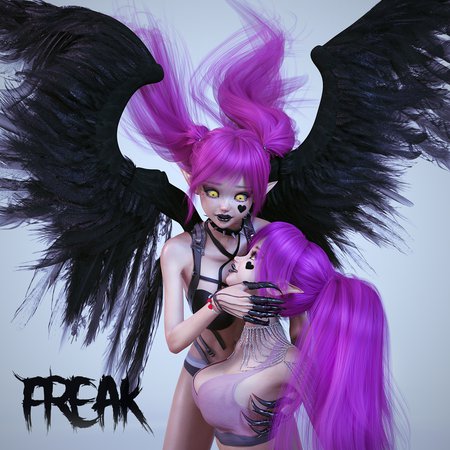 She has also just dropped an anime visualiser for the single. Watch here. Laced throughout with samples - from a witch’s cackle and a razor-sharp knife, to the ringing chimes of slot machines - ‘Freak’ is a refreshing blast of bass-heavy, futuristic cyber-pop, blended with an infectious Britney Spears-style beat.

In keeping with Theia’s signature sound of pairing hard-hitting lyrics with thunderous production, ‘Freak’ tells the story of a Las Vegas ‘woman of the night’. “It captures the grungy and sensual nature of strip clubs and the powerful women who inhabit them,” says Theia.

A respected songwriter whose work to date is mostly autobiographical, ‘Freak’ sees Theia turn her talents to telling the story of a fictional character named Evangeline.

“It was really fun for me to write a song about someone who wasn’t me,” she says. “At the time, I had been listening to artists like Stevie Nicks, who wrote so beautifully about strong female characters like Rhiannon. In this instance, I’ve written about this powerful female character who lives her life on the edge and in the dark.”

‘Freak’ is accompanied by a hentai-inspired artwork and a visualizer made by Russian 3D artist Escada Nula, whose credits include the video for Grimes’ song ‘Darkseid’.

The anime imagery seeks to challenge the ‘male gaze’ in which strippers are viewed as powerless objects, by depicting them as strong, sensual and unapologetic in their sexuality.

The single was made with support from New Zealand on Air.

Theia has been making waves on the music scene since she first appeared in 2016 with her break-out hit ‘Roam’. She has gone on to amass a loyal fanbase across the globe, receiving critical acclaim from the likes of Pigeons & Planes, Clash Magazine and Billboard Magazine, which recently described Theia as “one of the most exciting voices in pop to emerge from New Zealand in the last five years”.

Catch Theia live this summer at Northern Bass and Splore, with more summer dates still to be announced!