Following the recent release of “Magnolia (ft. Zeph)”, today THOMSTON shares his new single ‘Honeymoon’, a look at the point of a relationship where the heat has started to fade and one is forced to examine the hard truths they were so easily able to overlook once before. ‘Honeymoon’ showcases Thomston and Dylan Nash’s upbeat dance forward production ironically set against the sad realization that the honeymoon period is over. 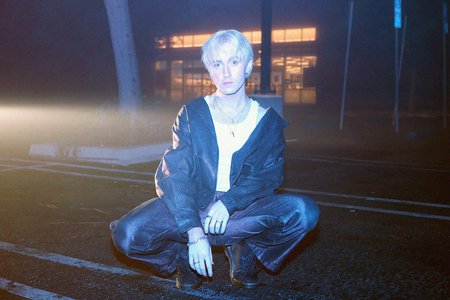 Thomston says, “‘Honeymoon is about losing that all-encompassing head rush at the start of a relationship, and taking a realistic assessment of where you’re at. You start to romanticise everything from the ‘before times’, when your brain was spitting out all the chemicals to make you feel euphoric, untouchable. I loved the idea of taking a really pragmatic look at love, dissecting both some cold honesties and some earnest self reflection.”

The release is accompanied by a visualizer that showcases Thomston being driven around in a shopping cart throughout his native Auckland, New Zealand in the middle of the night.
A “New Zealand art-r&b aesthete,” (The Fader) THOMSTON has honed an intriguing sound of his own with inspiration from Frank Ocean and James Blake and a razor-sharp pen reminiscent of Taylor Swift and Lorde.

In 2018, his anthemic single ‘THE HEIGHTS’ soared to #1 on the Hot NZ Pop Chart leading to an MTV EMA nomination for Best New Zealand Artist, joining the ranks of Lorde, Benee, Kimbra and more. The lyrics "so if I fall, it’ll be cause I jumped and if I jump it’ll be because I’m reaching the heights,” are symbolic of his steady rise to recognition. By 2019, he had been named One To Watch from the likes of Triple J in Australia to KCRW statewise as his follow-up single 'ACID RAIN' (both self-written and produced) became his most well-received release to date.

Since he emerged with his debut record TOPOGRAPH as a teenager, New Zealand’s best kept secret has amassed over 150 million streams worldwide, toured in support of Broods and Billie Eilish, and received acclaim from tastemakers such The Fader, Noisey, NYLON, Pigeons & Planes and COMPLEX among others.