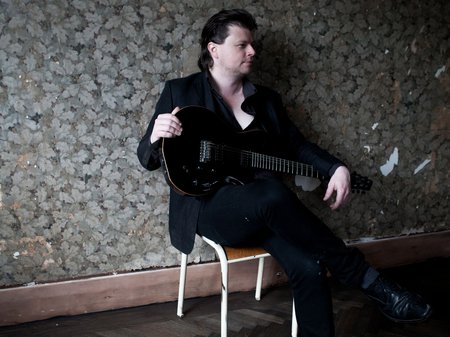 Today he shares the primitive first single, Touch Me Like A Teddy Bear - a lascivious black hole of meaninglessness and satire - accompanied by next week’s bizarre video release care of UK Instagram artist Tat Vision (who's work has recently featured as The Guardian's Pick Of The Week).

“Teddybear was put-together as a sort of anti-mantra, a meditative work that achieves the opposite of enlightenment," says Rodwell. “People ask me what it’s about - it’s about four minutes and six seconds long. I think the world is finally ready for one-chord songs again.”

Released on Fireplace Recordings, Wood & Waste is a charmingly decadent record from the singer-guitarist best known as frontman for arthouse blues institution Storehouse, and itinerant session man for the likes of Don McGlashan. Rodwell’s record transforms skeletal guitar structures into suggestive new forms - with unexpected influences, improvisation and dream-logic lyrics all playing a part.The album’s centrepiece is “She Got Me Boiling”, a juggernaut of psychedelic calypso grafted to mindless riffs on cannibalism that would make the Mighty Sparrow blush. Driven by Rodwell’s trademark bass-heavy guitar and animated carnival drums from free improv notorieties Chris O’Connor and Jeff Henderson, it’s a fiendishly irresistible piece of music. Elsewhere “Keep on Knockin’” subverts a grim Bo Diddley beat with dissonant Mellotron in praise of Edward Hopper and William Morris, while “Plenty Time” is a species of prog rhumba set in Roman Britain, indebted to Nigerian giant King Sunny Ade.Tracked and mixed entirely on tape at Roundhead Studios, via The Who’s old Neve console, Wood & Waste is an entirely analog production with no digital conversion at any stage - a Triple AAA analogue rarity. Mastering and lacquer was cut directly from the 1/2” mixdown tapes by the legendary Kevin Gray in Los Angeles, and the first run of 500 units was by audiophile press Pallas in Germany.

Rodwell’s revival of blues music as a vehicle for dance has been supple enough to embrace rhythms from spirituals and calypso, and seen him support acts like Otis Taylor, C.W. Stoneking and Leon Russell, touring internationally since 2003. (“Beautiful tunes, beautiful groove—you don’t hear that anymore,” said Derek Trucks). A parallel career as a session player has seen him moonlight live and on record for artists as diverse as Lonnie Holley and Robert Lamm (Chicago), as well as numerous avant-jazz projects.