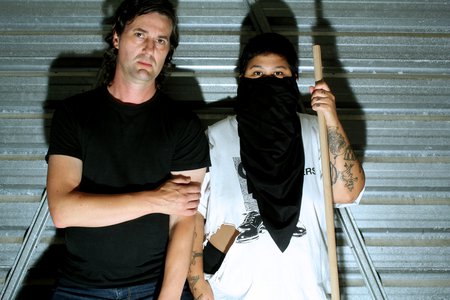 Members Dorian Noval (Jazmine Mary, Natural Glow, Exit Fear), and Nich Cunningham (The Moonlight, Lost Rockets), offer up an uncouth and disheveled sound that is engaging and off-kilter with their intertwining Jekyll and Hyde vocals, fuzzy bass, and catastrophic drumming. Playing a distinct, idiosyncratic version of punk, they've opened for Sleaford Mods, Divide & Dissolve, Street Chant and The D4 to name a few.

Speaking of the album, vocalist Nich says, "Rather than simply documenting a live performance, Fake Teeth instead intends to subtly extend our sound and best represent our relentlessly bleak worldview.

"Some people are really good at channeling their musical ideas into a coherent style. Tooms isn't like that. Tooms isn't that deliberate. Tooms is ugly bile bubbling up from the subconscious."

1:12 have been chasing Tooms for a full-length LP since they tore up Whammy Bar for their unforgettable 2019 Xmas party (13 bands, 2 stages, 1 room). After 2 years of label cajoling, Covid-cancelled tours and international/local production delays, the band and their label can't wait any longer. Here is Fake Teeth - 15 post-punk doom-pop anthems to shake the nation out of its lockdown lethargy.

Available in strictly limited vinyl LP from February 28th, 2022. Sales and distribution via Flying out.