Today Vera Ellen shares a second sensational single, ‘I Want 2 B Boy’, from the upcoming album ‘It’s Your Birthday’ out October 8th via Flying Nun Records. 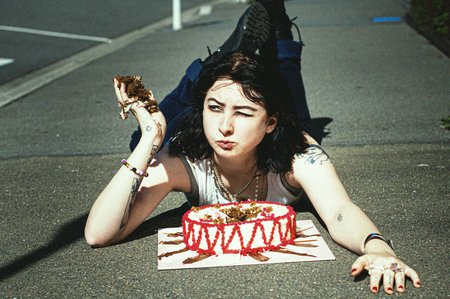 ‘I Want 2 B Boy’ explores the depths of identity — and the incertitude that can arise from opening a can of this particular brand of worms. Sonically, the track makes immaculate use of synthesizers, and scratches our itch for a spirited sing-a-long. Equal parts triumphant and ambivalent, the sonic delivery oscillates between the two, showcasing Vera’s incredible song-writing prowess.

Vera has said on the track, “Ahh.. the multiple layers of feelings you get when you step into yourself. Joy! Pain! More confusion! You spend your life trying to find your footing and often when you do, you just step into another layer of questioning."

Vera, in cahoots with pals Randy Kaufman & Cosby Kaufman (and special guest Howie theDog) , has released a video for today’s tune, and has this to say about creating the accompanying visuals: "The internet is like the wild west. You just shoot and hope for the best. Most of the time, "the best" is a 20 minute long video of someone you will never meet eating a large amount of hot dogs. Identity and comedy — take what you will, but just be assured, no hot dogs were harmed in the making of this video."

Vera Ellen’s upcoming Flying Nun debut, It’s Your Birthday, was written over the space of a few years. It chronicles the highs and lows of Vera’s early twenties, and is integral to the artist’s growing process. Each song hits some kind of unforgettable, yet relatable, touch stone in the artist's life: “I feel pulled back to those moments whenever I play the songs. Some of it was written when I was broke living behind a sheet in a lounge in Hollywood, some inspired by the characters both beautiful and dark (mostly both) I met in Los Angeles, some when I felt rejection in the lowest pits of my stomach and also when I felt so much elation I thought it couldn't be possible to be any higher, some when l was so homesick I wanted to puke, some in the throes of love and other heartbreak. The stuff of life.”  Vera continues, “If you listen through it tells a story of where I was to where I am. Not that anything is ever truly resolved or figured out. It makes me happy having this body of work to give some meaning to some really dark places I have been in the last few years. Places that otherwise felt like a string of random unconnected feelings and events. If all my diaries burn, at least I will have this album.”

"It’s Your Birthday has a rare raw emotional vulnerability that tips and steadies and makes for one of the most complete album listening experiences of the year." - Roger Shepherd" [It's Your Birthday] is straight up great. The songs move in mysterious, exciting ways and Verais an actual rock star." - Elizabeth Stokes (The Beths)

Vera had about 12 demos which she sent to her friends Dad, Mark Austin. In January of 2020, Vera and Mark recorded it over a couple of days with the help of some friends at Pyramid Club. Vera went back to America in February and that was sort of meant to be the end of it, but fortunately for the rest of us and due to the global pandemic, Vera ended up coming back to New Zealand and was able to add songs and extra instrumentation to the album throughout the year.  “If you can imagine, you're twenty years old and you write about some dreadful personal turmoil, and now you're twenty five and you think, let me just share that with everyone I know and a few strangers while we are at it. If I am honest, I'm a little terrified about having this record out in the world. It feels very exposing. At this point I may as well become a nudist.”  It's Your Birthday is Vera Ellen’s gift to the world, but Vera wants to be the kind of uncle that always shows up with a gift on your birthday, so it shan't be the last.