VIKAE Presents the 'Focal Point' of Her Debut Album - INFERNO 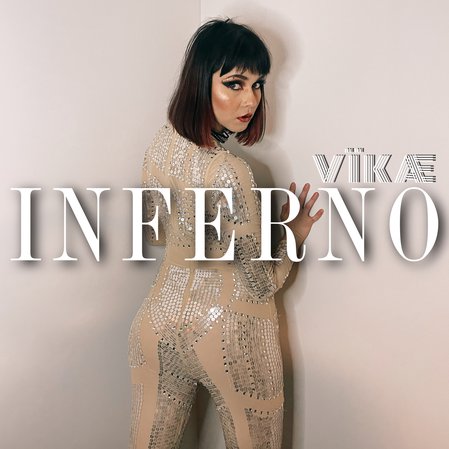 The single was produced by Will Henderson and is her main collaborator for her current project. The single comes with two alternate versions to ensure that at least one of them has the ability to tickle someone's fancy! The vocals were produced by long-term colleague and mentor Abigail Knudson. Inferno is the leading single from her upcoming debut album INFERNO. VÏKÆ began writing this song during the very first "OG" lockdown in March 2020; Inferno taking inspiration from missing the heat of the summer sun, missing friends and good vibes. VÏKÆ wrote this song to be enjoyed by the dancefloor and ravers alike come the warmer months which are just around the corner.
Inferno is warm, sunny and fun. With a gentle nod to the Summer season to come and with hope that alert levels will lessen, this song was written with good vibes and good times in mind. Inferno explores her early twenties - a 'party time' part of her life which runs parallel to her debut EP Finelines (which was released in 2020). VÏKÆ describes the process as 'cathartic' and 'necessary' for her healing process. "It's taken nearly four years to get to this point. It's bittersweet but it's time to put these feelings to rest", she says. The soundscape features old school 80s synths like the Roland D-50 and E-Soniq Mirage as well as fat 808's, spicy marimbas and random samples from everyday objects found in the studio.
VÏKÆ has been busy since her debut EP (FINELINES prod Abigail Knudson) was released last year. With honorable mentions in The NZ Official Charts and SRN Charts (respectively); she has been on four separate nationwide tours and performed at some of the biggest music festivals in the country including Baydreams Nelson, Hamilton Garden Arts Festival and Mardi Gras. Most recently, she has been added to AUM Festival where she is playing her first NYE set with drummer Jessica Hix.


VÏKÆ wrote many of the songs for INFERNO during quarantine last year when she was revisiting her old Ministry of Sound records that she spent all her pocket money on and collected in secret as a child. Inspired by her younger self, VÏKÆ wanted to make music where one could dance around the living room screaming into a hairbrush microphone but yet find depth and stillness within the lyrics. Acknowledging the irony in writing dance/house music whilst being stuck in her house; a small hint of frivolity was an appropriate escapism from the world's climate at the time (which sadly has not yet changed for many parts of the world). Each song has been carefully crafted with impeccable lyricism and emotive song writing; with a desire to blend the best of dance music and elements of pop.