Wellington’s Wallace has today released her highly-anticipated debut album AND OTHER COLOURS, as well as her poetically nostalgic latest single ‘Ae Fond Kiss’. 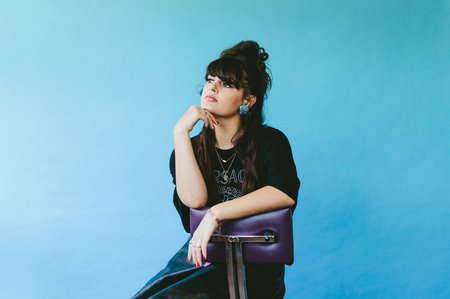 Listen to AND OTHER COLOURS HERE

Order the album on vinyl HERE

A colourful glimpse into all corners of Wallace’s mind, AND OTHER COLOURS is a journey into the intriguing world of her soul, hip hop, pop and jazz influenced sound. The album takes in emotion driven tracks like ‘Orchid Care’, to nostalgic bops like ‘Arcade Queen’, and everything in-between. As Wallace describes: “AND OTHER COLOURS is a love letter to my favourite hues, linking my very visual way of moving through the world with the abstract, sonic space I love.”

The 13-track album features an impressive and eclectic mix of producers and musicians from around the world, including PlaceFace, Lewis Moody, Dennis Neuer, Axel Reinemer, Feiertag, Turbo Chook, Danny Barwick, Godriguez and Yelderbert.

“I think the beauty of having the opportunity of working with different producers, is that you discover a new angle or aspect of your creativity,” explains Wallace. “I love leaning into that and learning from whoever I'm working with, and I think this release really shows my range as a performer; nodding to my many influences, old and new.

“It’s amazing how far this album has travelled. Inception in Sydney, Covid side-stepping in a locked down London then finally settling and getting its final touches at home in Wellington. It's followed me around the globe and been there for some of the biggest moments of my life.”

‘Ae Fond Kiss’ is the lead single from AND OTHER COLOURS, a track inspired by a famous poem written by Scottish legend Robert Burns:

“Ae fond kiss, and then we sever;

Ae fareweel, and then forever!

As Wallace explains: “I was very homesick for New Zealand at the time I wrote this song. Instead of missing a lover’s kiss, I was pining for the terrible weather in Wellington, my little duck egg blue house up on a hill near the Windmill in Brooklyn, and my incredible parents.”

‘Ae Fond Kiss’ is the latest in a string of stunning singles from Wallace’s album, with ‘Arcade Queen’, ‘Orchid Care’, ‘Every Stroke’ and ‘Venus, The Birth Of’ receiving support across the globe from BBC1 Radio, RadioActive, HitFM, FBi Sydney and Amazing Radio to name-drop a few.

Today’s album release marks a significant milestone for the talented Wellington singer and songwriter, whose music has been described as a vibrant mosaic of soul, hip-hop and pop, her trademark jazz-influenced vocals and magnetic presence demonstrating her evolution as a songwriter to watch.

Witness Wallace in her element on stage, at one of her upcoming shows. Taking in Wellington at MEOW on August 26 and Auckland at The Tuning Fork on August 27, Wallace will be performing with her full band on the line-up with Ngaiire. To get a taste of Wallace’s unstoppable live vocals, watch her recently released stripped-back version of ‘Orchid Care’ HERE.

Listen to AND OTHER COLOURS HERE