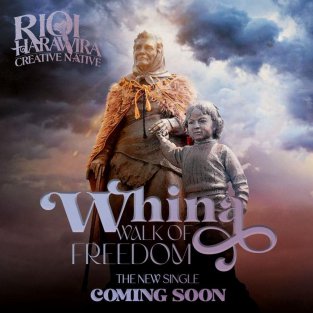 This track has a fusion rock vibe, which is key to Riqi Harawira's sound. Adding layers of guitars and a steady rock rhythm, Harawira has a knack for the new. His musical ability to share a kaupapa Māori message with his ‘Guitaiaha’ is a fresh addition to our changing Māori Music scene. Made with the support of Te Māngai Pāho, we were able to create something that celebrates a wahine with mana and a vital message.

The Music video is a tribute to Dame Whina Cooper and her mission to raise awareness around Māori land rights. She brought together a raft of kaupapa around racial equality, kaitiakitanga, the right to govern our land, the loss of mana, and many grievances. She put all her mauri/energy into a revolutionary Māori hikoi/march and galvanized it with the term ‘NOT 1 ACRE MORE’.

“In July of 2020, I rang my partner to tell her that Dame Whina Cooper had come to me in a dream. She said ‘Whakanui tēnei pūrakau’ (tell the story about the march to Parliament). Coincidentally my partner reported that she had just met a kuia that day in the hospital ward convalescing next to her sick mother. The kuia regaled her with the memory of being on the march with Dame Whina, and the experience of walking over the harbour bridge. At that moment we knew he tohupai (this is a good sign) to develop this waiata and music video”. Riqi Harawira

Even though the production for ‘Whina - Walk of Freedom began in 2020, to Harawira it is a tohu/sign that the single and movie are coincidentally released. The original release date for the single was summer 2021, then postponed until Feb 2022. The next barrier was the anti-vaccine, anti-mandate occupation of the grounds of Parliament House and Riqi did not want to release this song during this occupation in Wellington.  The decision was made to launch the day after Whina the movie was released, to uphold the mana of the film and to make it clear that the waiata has its own journey/haerenga however supporting this film and kaupapa.