Aotearoa’s elaborate musical landscape has produced a Top 5 finalists list like no other for the 2022 APRA Silver Scroll Award | Kaitito Kaiaka. The coveted award has been a mark of excellence in New Zealand songwriting for over 55 years and this year’s finalists are each worthy contestants to join the prestigious Silver Scroll legacy. 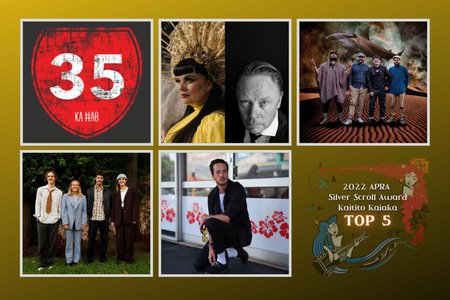 Te Tairāwhiti choir Ka Hao and Rob Ruha’s feel good waiata ‘35’ gained international recognition after going viral across multiple social media platforms in late 2021. Written by Rob Ruha, Kaea Hills, Te Amorutu Broughton, Ainsley Tai, Dan Martin and Whenua Patuwai the local anthem, which is a nod to the highway that runs along the East Coast, has over 8 million streams on Spotify alone and was Ka Hao’s first single preceding the release of their debut album Ka Hao: One Tira, One Voice. The coming together of Rob Ruha and Ka Hao is seamless, as a project to promote and revitalise te Reo Māori, the group's name refers to the proverb ka pū te ruha, ka hao te rangatahi (as the old fishing net is worn, a new one is made), referring to youth growing up and entering adulthood. With his distinguished and respected kaitiaki of waiata reo and rangatahi in Aotearoa, Rob Ruha is the perfect conduit to welcome Ka Hao into the legacy of Silver Scroll.

Tami Neilson is a force to be reckoned with and her 5th album, Kingmaker is a sturdy reminder of the determination and will-power she wields. Written alongside New Zealand’s accoladed & adored country troubadour Delaney Davidson, ‘Beyond the Stars’ sounds of sadness, and in many ways, is an aural reflection of the complete consumption that grief is capable of - A theme that is explored throughout Kingsmaker. However, the distinctive depth of Willie Neilson’s voice on ‘Beyond The Stars’ plays into the narrative perfectly and really drives home the deliberate nature in which this song and it’s message, have been composed.

Hailing from Ōtautahi (Christchurch), There’s A Tuesday are a four-piece indie-pop band who, with their earworm ‘Girl At Night’ have landed proudly in this year’s Top 5. Natalie Hutton, Minnie Robberds, Angus Murray and Joel Becker catapulted onto the Aotearoa music scene after winning Smoke-free Rockquest in 2019, before going on to drop their debut EP Dance With Me Before We Cry – featuring the fan-favourite hit ‘Amsterdam’. The gentle honesty of their composition, coupled with Nat and Minnie’s melting vocals lead to BENEE signing There’s A Tuesday with Olive Records, with whom they have recently released Boy Scout - The six track EP showcasing the homely, generosity of each TAT members distinct indie sound. You’ll find ‘Girl At Night’ as track two of this dreamy taste tester.

LEARN MORE ABOUT THERE'S A TUESDAY

Off the back of his 2021 Silver Scroll for ‘All Your Ships Have Sailed’ Troy Kingi returns to the Silver Scroll Top 5 for the second year running. This time accompanied by Iraia Whakamoe, Ryan Prebble and James Coyle AKA The Nudge for their waiata reo Māori, ‘He Ōrite’. Having shared stages and shows together since 2020, it was only a matter of time before the seeds of collaboration began to sprout between the two acts - ‘He Ōrite’ is the fruits of this labour. Meaning ‘The Same’, ‘He Ōrite’ possesses a poignant and timely message: that we are all equal. This funky waiata is laced with The Nudge’s signature psychedelic/funk baselines and drums, while Kingi’s unmissable vocal tones wrap the whole ensemble together, delivering a message that not only Aotearoa, but the whole world needs to hear right now.

The decorated Marlon Williams is the fifth finalist for this year’s Silver Scroll | Kaitito Kaiaka for his latest hit ‘My Boy’. Ahead of his album release by the same name, due September 9th, Marlon said “My Boy is a pop song with a Māori folk strum. The urge to turn every song on the planet into a Māori strummer descended on me like a fever sometime during the long and winding tour cycle of Make Way for Love. So, writing it into my artistic life became the only way to get the fever to lift.” And perhaps it was not so much that the fever stopped for Williams, but rather that it was woven into his works and has been gifted to his listeners. ‘My Boy’ is catchy - from the melody to the structure and the hook... especially the hook.

The other awards presented at the 2022 APRA Silver Scroll Awards are: All awards will be presented at a private event held at Spark Arena on Tuesday 18thOctober.

With thanks to NZ On Air, Te Māngai Pāho, and Hallertau Brewery

Artwork designed by Miriama Grace-Smith
Back to Commission News