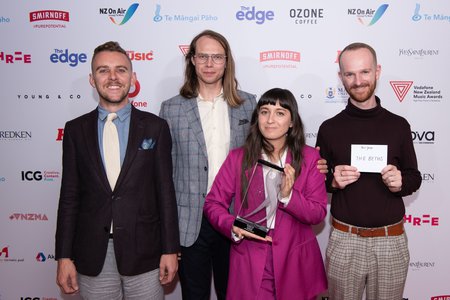 The nineteen-year-old was awarded Best Solo Artist | Te Kaipuoro Takitahi Toa and Vodafone Single of the Year | Te Waiata Tōtahi o te Tau on the back of her certified platinum debut single ‘Soaked’.

The album, which hit #1 in the Official New Zealand Music Charts, was conceptualised by artist Tom Scott along with talented musicians who brought each song to life. He also performed ‘Home’ with the Avondale Intermediate School Choir, an homage the school he attended in his youth.

Also picking up two Tui was indie pop band The Beths for Best Group | Te Roopu Toa and Best Alternative Artist | Te Kaipuoro Manohi Toa, following the success of their debut album Future Me Hates Me in 2018. The four-piece band has been taking New Zealand and the world by storm, with sell-out shows across New Zealand, Europe and the UK.

Legacy award | Tohu Whakareretanga and NZ Music Hall of Fame | The Whare Taonga Puoro o Aotearoa inductees Th’ Dudes reformed to play their own tribute performance, a medley of their classic Kiwi songs – including Bliss, Be Mine Tonight and Walking in Light.

They were joined by special guests Rikki Morris, the brother of the late Ian Morris, as well as Ian’s daughters Julia and Maude of LEXXA, capping off an amazing night of celebrating Aotearoa’s booming music scene.

Big winners at last year awards, Drax Project received the Recorded Music NZ International Achievement | Tohu Tutuki o te Ao for the success of their single ‘Woke Up Late’, which went double platinum by the Australian Recording Industry Association and has more than 70 million streams on Spotify to date.

“The calibre of talent just keeps getting better each year with more and more of our talented Kiwi musicians making an impact both in Aotearoa and abroad.

We’re consistently impressed by the creativity, skill and expertise of our musicians and New Zealand should be incredibly proud. The Vodafone New Zealand Music Awards give us a chance to acknowledge this as well as encourage aspiring and emerging artists to continue forging their music journey.”

The 2019 Vodafone New Zealand Music Awards were hosted by Laura Daniel and Jon Toogood, with performances from Avantdale Bowling Club, The Beths, BENEE, Mitch James, Troy Kingi and Villainy, as well as a moving performance from Teeks & Hollie Smith and rocking finale from Th’ Dudes.