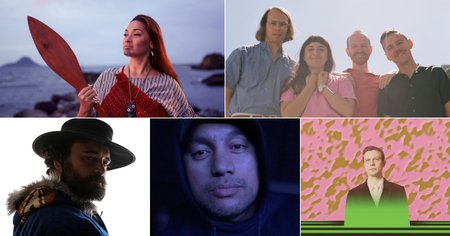 In case you missed it, last week we shared the finalists for the APRA Maioha Award (as voted by you!), the SOUNZ Contemporary Award | Te Tohu Auaha finalists, and the APRA Screen awards finalists. Read about all the finalists via the links below!

Kia ora e te whānau. So here we are again. Tricky times eh. We're thinking of all those who had gigs or tours or sessions or recording booked and have now had to postpone (again). The uncertainty is unsettling for sure.
But we're all in this together, and we wanted to let you know that all of our usual APRA lines of communication (phone, email, live chat) are open, and we're here to help if we can.
Also thought we'd share a few handy links that might be of use while we're stuck in doors.

These are the incredible songs chosen as finalists for the 2021 APRA Silver Scroll Award, as voted by New Zealand APRA members. The award recognises excellence in songwriting and has been presented for 56 years.

All Your Ships Have Sailed, written and performed by Troy Kingi (Published by Loop Publishing | Kobalt Music Publishing Australia)

The funk-laden 'All Your Ships Have Sailed' comes from Troy Kingi's deeply personal and nostalgia-filled record The Ghost of Freddie Cesar, the fourth album from his 10 10 10 series (10 albums in 10 years in 10 genres). Pulling from retro 70's-funk, Troy brings to life a character inspired by his missing father and a mysterious cassette tape. Being such a prolific artist, Troy is also a co-writer and vocalist on a second finalist song, ‘Turangawaewae'.

Maisey Rika brings waiata reo Māori to the spotlight this year with three finalist nominations, co-writing both 'Hiwa-i-te-rangi' and ‘Turangawaewae' for the Silver Scroll Award, and 'Waitī Waitā' for the Maioha Award. 'Hiwa-i-te-rangi', co-written with Chris Chetland and hip-hop artist Rei, celebrates the youngest star in the cluster of Matariki. With the guidance of a Māori astronomer, Maisey Rika (a recent Arts Laureate Award recipient) created the album Ngā Mata o te Ariki Tāwhirimātea turning ancient stories of Matariki into beautiful waiata.

Tāmaki Makaurau indie-rockers, The Beths return to the Top 5 this year with a love song that lays it all on the line, ‘Jump Rope Gazers' - the title track from their second LP of the same name. Blending the heartfelt and incisive vocals from frontwoman Elizabeth Stokes, with swaying, chiming guitar lines, and warm three-part harmonies from Jonathan, Ben, and Tristan, this is a soaring centrepiece of the record, which maintains their hook-laden, self-deprecating vibe, but turns up the pop power.

Co-written with Jonathan Pearce of The Beths, 'Leave Love Out Of This' is an expansive piano-driven political ballad, which brings Anthonie Tonnon back to the Top 5 this year. Widely known for his electric and immersive shows, technology has always been a close counterpart in Tonnon's music. On this title track from his recently released album, he weaves together the tasteful minimalism of paired back piano and vocals with an immersive synth-palette, eventually building to a swirling climax.

Representing the East Coast is Flaxmere-born rapper Tipene Harmer with his waiata reo rua 'Turangawaewae', co-written with Maisey Rika, Troy Kingi, and Tenei Kesha. It's nostalgic, proud, and deeply connected to identity. Tipene celebrates his culture and tipuna, welcoming us to celebrate Te Ao Māori. Featuring vocals from Maisey and Troy, 'Turangawaewae' epitomises bilingual excellence with the message to stay true to yourself.

If your business (yes, your music is a business!) has been affected by the recent move to level 4 please take the time to read through the COVID-19 Wage Subsidy details. You can find info about eligibility, how to apply, and forms via the link below.

In case you missed it, last week we shared the finalists for the APRA Maioha Award (as voted by you!), the SOUNZ Contemporary Award | Te Tohu Auaha finalists, and the APRA Screen awards finalists. Read about all the finalists via the links below!