Who are the twelve New Zealand emerging stars playing at this years showcase event? Read on to find out! 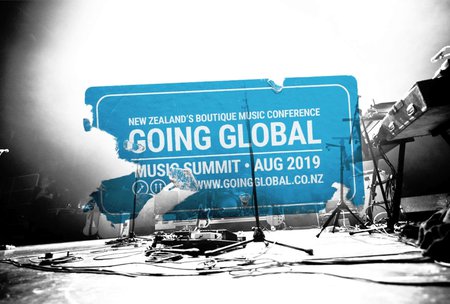 Today, Independent Music NZ share the incredible line-up performing at this year's Going Global Presents - an artist showcase following the two-day Going Global Music Summit which invites over 20 international speakers to share their experience and expertise. Going Global Presents gives Aotearoa's most talented, inspiring artists the chance to represent New Zealand's abundant music scene to international industry experts all the while welcoming the general public to enjoy for themselves!

In 2017 and 2018 the events sold out, and Going Global showcases have been instrumental in the discovery of some of New Zealand's biggest success stories over the past nine years. Previous artists include; Aldous Harding, Tami Neilson, Tiny Ruins, Soaked Oats, Sachi, Holy Arrowsmith, Fazerdaze and Nadia Reid.Going Global Presents will be held in some of Auckland's most treasured venues inside ever-evolving St Kevin's Arcade, K' Road: Whammy, Whammy Backroom and Wine Cellar. Tickets at Undertheradar and it's not too late to grab a ticket to the Going Global Music Summit, grab your pass here!

Comprised of multi-instrumentalists, Alex Farrell-Davey, Allister Meffan, Jayden Lee and bassist Marika Hodgson. New Zealand band Alae are poised to take their sophisticated brand of indie pop to the world. Henry St is a record supported by both local and international media including Billboard, Rollingstone and MTV. Alae have supported notable international acts including John Butler Trio, Callum Scott, James Morrison, Angus and Julia Stone. They are set to release a new EP later this year.

Daffodils are a four-piece new wave-inspired indie-pop band based in Auckland. Over the past year they have supported international acts Pale Waves and Foals and notable New Zealand bands such as Soaked Oats, Miss June and Openside. Daffodils played at St Jerome's Laneway festival this year and last year sold out their debut headline show to 400 people at Auckland's Tuning Fork. Daffodils recently played two big shows alongside Australian indie greats, Methyl Ethel in Auckland and Wellington and are now prepping for a much-awaited EP release.

Emily Fairlight has a proper folk singer’s background: a teenage runaway adventurer in Australia and India, a circus school student who once sang naked at a burlesque night on a whim, a female-friendly pornography-free sex toy shop assistant, a barista and a runner/jack-of-all-trades at a digital visual effects company. Her vocal style – a powerful quivering vibrato and a stark, haunting tone, teak-hard yet soft as crushed velvet. Fairlight recorded Mother of Gloom with Doug Walseth at The Cat’s Eye Studio in Austin, Texas.

Auckland-based pop duo, Foley are beaming after the success of two previous singles 'Talk About It' and 'Stranger'. They received boundless support from New Zealand media and have graced international Spotify playlists. In 2018 Foley supported Openside on their No Going Back Tour, playing Christchurch, Wellington, Palmerston North and Hamilton. Foley are preparing for their debut EP release due the end of this year.

Imugi 이무 quickly went from bedroom artists to making waves around New Zealand following the release of their debut EP titled Vacasian. The electro-pop duo have made appearances alongside local and international gems including Bailey Wiley, Leisure and modern-soul group Jungle on their sold-out NZ tour earlier this year. Imugi are due to announce their very own national headline tour, a first for the enigmatic duo.

Jack Berry is Damin McCabe’s smooth, laid-back, guitar-pop alias. Despite only having released a handful of tracks over the past two years, Jack Berry have been selling out shows all around New Zealand. As well as their own headline shows, they’ve completed a national co-headline tour with Mild Orange, supported BENEE, LEISURE, and Balu Brigada, played on the Huffer Anniversary Tour, supporting Kllo on a Red Bull Music tour, and festival appearances at Rhythm and Vines, House of Vans and NESTFEST.

Of Kenyan descent, JessB grew up in Auckland and naturally gravitated towards hip-hop from an early age. Raised by her adoptive parents, hip-hop offered an avenue to explore her identity in a way that felt natural - providing a cultural touchstone as a minority in New Zealand. JessB recently made an appearance on triple j Bars of Steel, a great feat for any New Zealand artist visiting Australia.

With a strong sense of melody and emotionally raw sincerity, Mousey cherishes the art of songwriting above all else. Her sound edges the restrictions of genre and her music provides a unique and powerful insight into the world of a true storyteller. Mousey is releasing her debut album in October with support from Creative NZ. Achievements include two APRA songwriting awards (winner/runner-up), won Best Song at 48hrs Film Competition 2018 (Christchurch), performed backing vocals on Tami Nielson’s album Sassafrass, and at the subsequent Christchurch show.

When Hamilton based Rwandan rapper Raiza Biza’s smooth baritone and contemplative storytelling blurs into the jazz/soul tinged beats he favours, it’s hard to not be swept away. Raiza Biza exemplifies the story of a young immigrant who made New Zealand his home, while simultaneously reaching out to a global audience, and all through music. His meticulously placed rhymes tackle the experiences of growing up in Zambia and South Africa, before coming of age in New Zealand.

Auckland singer-songwriter, Paige, won the world over with her self-filmed DIY videos. Paige has opened for international acts, such as George Ezra, Nina Nesbitt, is supporting Kiwi pop sensation Drax Project on their 2019 NZ winter tour AND will open for Six60's at their Western Springs, Auckland show early 2020. Paige recently featured on indie-pop act Balu Brigada’s song ‘Slow Dive’ and will also feature on a song from JessB's upcoming EP. In the coming months, Paige will reveal songs from her upcoming EP. Expect a sound steeped in warm, old school R&B, with funky tones.

Soaked Oats are a young four-piece band that percolated into existence in Dunedin, New Zealand.  Catapulted by their infectious and joyful shows and fast-evolving songwriting chops, the band's profile and fanbase are on a steep rise.   2019 saw the release of their most accomplished work to date, Sludge Pop EP. The band's single 'Coming Up' was discovered by indie-rock icon Sharon Van Etten who shared to her 90 thousand plus fans, the band were signed to Australian label Dot Dash (Methyl Ethel, Gabriella Cohen) and invited to play UK’s tastemaker festival The Great Escape. Sell-out shows across NZ and Australia and the UK throughout 2019 have the band excited for what is to come as they begin work on their debut album proper.