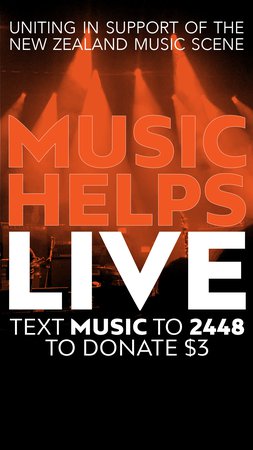 Evocatively shot in the deserted interiors of two of New Zealand’s most iconic venues, The Civic and Spark Arena, leading artists such as Dave Dobbyn, P-Money, The Beths and other top acts address kiwis directly through the camera to encourage them to lend their support to the people whose livelihoods have been most affected by the shutdown of the music industry: live production crews and those behind the scenes that make live shows possible.

The campaign asks kiwis to text “MUSIC” to 2448 to donate $3 to the emergency appeal MusicHelps has established to address the crisis: MusicHelpsLive. As a result of the MusicHelpsLive appeal, the charity has already been able to extend over $200,000 in emergency support to music workers experiencing severe financial and emotional distress due to the COVID-19 crisis, with more to come.

Although NZ has moved to Level 1, the damage wrought by the total suspension of live music for an extended period is still very real and present. MusicHelps aims to raise $2 million dollars through the MusicHelpsLive appeal to see affected kiwi music people through the winter. All funds raised will be distributed to those music workers whose livelihoods have been shattered by the virus.

MusicHelps board chair Campbell Smith says: “The devastating effect from Covid-19 on the livelihoods of thousands of kiwi music people and businesses will continue to be felt now and into the future. Cancelled shows are not all going to be rescheduled, venues are still threatened; production suppliers, roadies and crew are still without work they were expecting through the year. These hard-working, ordinary New Zealanders and their dependents are still facing levels of distress and hardship never seen before.”

"As a Musician and Vocalist for Blindspott I understand first-hand how important our crews are to making shows happen” says Creative Director at LIKEMINDS, Damian Alexander. “I also know quite a few of them exist show to show and rely on a thriving and busy live scene to survive. As a creative director and film maker with my own agency now, it was great to partner with MusicHelps and do my bit for the people who make our shows happen during an extremely trying and difficult time.”

The campaign will air across SkyTV and Mediaworks TV channels who are both supporting charitable causes working in sectors affected by Covid-19, as well as social media throughout June.