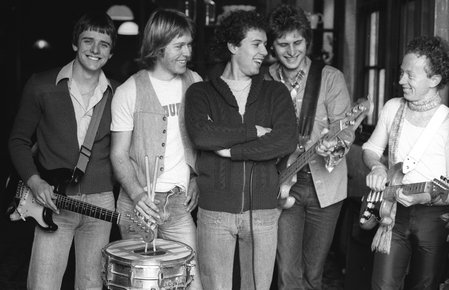 They will celebrate their induction with a performance at the 2019 Vodafone New Zealand Music Awards | Ngā Tohu Puoro o Aotearoa on 14 November at Spark Arena. Kiwis can experience the annual celebration of local music through THREE's live broadcast or by purchasing tickets from Ticketmaster today.

Th’ Dudes rocketed into music stardom in the late 1970s, recording iconic kiwi anthems such as ‘Bliss’ and ‘Be Mine Tonight’. Forty years on, the legacy of Th’ Dudes is etched in Aotearoa music history. Despite only releasing two albums, the band set a standard in original songwriting, in stage and performance, and album production.

Joined by Bruce Hambling and Lez White, it wasn’t long before the band began recreating familiar riffs and hooklines, turning to experimentation of their own.

Combining their influences and emulating their heroes like the Stones, the Beatles, Iggy, Mott the Hoople, Bowie, the Velvets, Graham Parker, and Elvis Costello, the group began working on their own songs – and creating Kiwi music history in the process.

Peter was the perfect frontman: confident, good-looking, and a natural showman in any era. Bruce and Lez were one of New Zealand’s most idiosyncratic rhythm sections: Bruce’s solidity balanced Lez’ flamboyance.

Guitarists and songwriters Dave and the late Ian effortlessly created catchy hooks and bouncy guitar riffs that resonated with the era. Songs such as ‘Be Mine Tonight’ and ‘Bliss’ became national anthems, and many others were equally as huge: ‘Walking in Light’, ‘Right First Time’, ‘That Look in Your Eyes’. They released their debut album in 1979 called Right First Time, which hit the bullseye as far as names go.

Their second album Where Are The Boys? was released in 1980, shortly before the group disbanded in May that year. When Radio With Pictures and Rip It Up announced the band’s demise, both outlets regretted that the band’s flash in a pan would result in them not receiving the credit they deserved.

Since then, the group have undertaken select tour dates over the years and last reformed in 2006 to remind New Zealand of their brilliance. Their songs have lasted decades and are still included among the classic songs of Aotearoa.

Recorded Music NZ CEO Damian Vaughan said Th’ Dudes and their legacy made a massive impact on the future of New Zealand’s music landscape. “Th’ Dudes created some of our nation’s most iconic songs and changed the way young musicians approached their own path into the music industry.

“They demanded respect from venues who normally looked upon bands as little more than a necessary nuisance who just happened to sell thousands of dollars of beer each night. And they changed this for all Kiwi musicians who came after them. “Be Mine Tonight, Bliss, Walking in Light are all quintessential Kiwi tracks that are part of the soul of the nation. Th’ Dudes and their recordings bring kiwis together in such a unique and special way, we’re honoured to acknowledge their influence.”

Th’ Dudes and their impact on Kiwi music will be celebrated along with this year’s winners at the Vodafone New Zealand Music Awards | Ngā Tohu Puoro o Aotearoa, which will be broadcast live on THREE on 14 November from 8.30pm. Pre-sale tickets are available from 9:00am today through Ticketmaster. General public tickets will be on sale from 9:00am tomorrow (30th August).