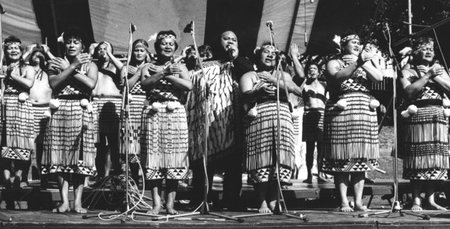 Recorded and released in late 1983, the single spent four weeks at number 1 and a further 22 weeks in the music charts, which was unprecedented for a song in te reo Māori. As well as being a sensation in Aotearoa, the Pātea Māori Club received international recognition - touring the United Kingdom in 1984, playing at the London Palladium, the Edinburgh Festival, and giving a Royal Command Performance. Top British contemporary music magazine of the time, New Musical Express (NME), named ‘Poi E’ its Single of the Week.This week, group member Maryanne Broughton remembers,"The release of 'Poi E' was a huge milestone for Māori music and was an extended dream of Dals’ and Aunty Ngoi's to get our language back out there, to encourage young Māori to be proud of being Māori. It actually wasn't popular with the older generation as it was not the traditional way of singing our songs but it was released at just the right moment, when young kids were learning and relating to te reo Māori via Te Kohanga Reo, and our teenagers were jumping on the break dancing craze. Singing 'Poi E' meant the kids were using our language every day."In 2010 ‘Poi E’ was used in Taika Waititi's hit movie, Boy. This saw the song back in the New Zealand music charts. A documentary on the song was released in 2016,  and in 2021 - 38 years after its release -  ‘Poi E’ is officially being acknowledged as an important part of our rich musical tapestry as the recipient of the 2021 IMNZ Classic Record.

Independent Music NZ (IMNZ) is very pleased to announce the finalists for the Taite Music Prize 2021 and the Auckland Live Best Independent Debut Award. These two prestigious awards will be awarded on Tuesday April 20th, 2021 at Auckland's Q Theatre, alongside the Classic Record Award and the yet to be announced Independent Spirit Award recipients.

Named after the late Dylan Taite, one of New Zealand’s most respected music journalists, the Taite Music Prize recognises outstanding creativity for an entire collection of music contained in one recording. The prize winner will receive a cash prize of $12,500, thanks to founding partner Recorded Music NZ and supporting partner NZ Music Commission.

The ten albums in contention for the 2021 prize include some of Aotearoa's finest musicians:

The Auckland Live Best Independent Debut Award celebrates the freshest talent of Aotearoa. The winner receives a $2000 cash prize plus a performance or technical upskilling opportunity thanks to Auckland Live.

The ceremony also includes the presentation of the Independent Music NZ Classic Record Award. This award acknowledges one New Zealand record released over 20 years ago on an independent label. These records, whether a 12”, a compilation, EP, or full-length album have become quintessential gold nuggets of our musical history.

The recipient of the 2021 IMNZ Classic Record:

Now in its third year, the Independent Spirit Award recognises and celebrates a New Zealander: someone who is passionate about NZ music; who's ahead of the game in creativity, diversity, and imagination; and has dedicated themself to helping artists and the wider music community to grow and find their own unique pathways. The annual recipient is determined by the IMNZ Board.

IMNZ General Manager, Dylan Pellett says, “Another year of diverse musical talent is on display within this year’s finalists. I’d like to extend a hearty congratulations to all the finalists and look forward to celebrating with you all in April this year!"

Any New Zealand album released during the calendar year of 2020 was eligible for nomination for the Taite Music Prize 2021. The winner receives a newly increased cash prize of $12,500, thanks to founding partner Recorded Music NZ and supporting partner NZ Music Commission.

A voting academy of all current members of IMNZ, musicians, and music industry personnel voted to produce the shortlisted finalist albums. An independent panel debates and scrutinises the shortlisted albums to decide the winner. That panel comprises musicians, journalists, and music industry professionals with a wide variety of different professional backgrounds and personal tastes.

The announcement of the winner will take place in Auckland at Auckland's Q Theatre on 20th April 2021.