Celebrating the unique voices of Aotearoa music and those that champion them. Nominations for the main Taite Music Prize, the Auckland Live Best Independent Debut Award and the NZ On Air Outstanding Music Journalism Award close soon. 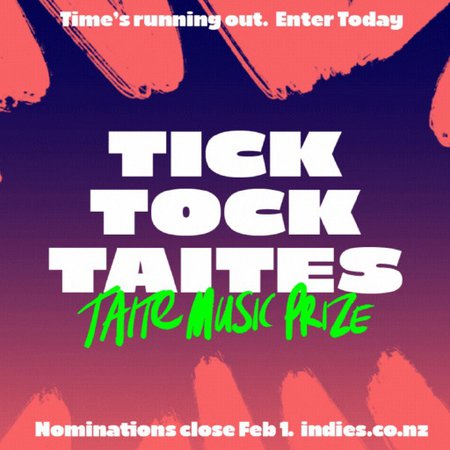 Now in its 13th year, the main Taite Music Prize highlights outstanding albums; recognising and celebrating the depth of talent and breadth of genres that make up Aotearoa’s unique musical voice. The highly coveted Taite Music Prize is open to all genres of music and judged on artistic merit regardless of genre, sales, or record label. Any Aotearoa/New Zealand album released during the calendar year of 2022 is eligible for nomination.  The winner receives a cash prize of $12,500, thanks to Founding Partner Recorded Music NZ. Previous recipients include Aldous Harding, Anthonie Tonnon, Avantdale Bowling Club, Ladi6, Lorde and Troy Kingi.


IMNZ Chairperson, Pip Ryan-Kidd says “2022 has been another extraordinary year for Aotearoa’s independent musician’s, with strong representation in released music, awards and touring. This year's judging panel will have a very tough time deciding who will take home our coveted Taite Music Prize trophy.

We are excited to return the Awards to our previous late April date, to be able to usher in the celebrations of NZ Music Month in May. IMNZ is immensely proud to produce an Award Ceremony that reflects creativity and puts artistic talent at the very core of the event. Once again, we look forward to hosting the celebration in the seated Rangatira at Q Theatre, and encourage Aotearoa’s music community to join us.”

The Auckland Live Best Independent Debut Award celebrates the freshest talent of Aotearoa. We are celebrating debut albums or EPs (with a total of at least four tracks and/or duration of more than 20 minutes), released by IMNZ members in the previous year. Thanks to Auckland Live, the winner receives a $2000 cash prize plus a performance or technical upskilling opportunity.

From Auckland Live, Helaina Keeley, Manager Creative Industries Development, comments “Auckland Live is proud to continue our partnership with the Taite Music Prize with support for the Best Independent Debut Award in 2023.  New Zealand is blessed with a wealth of new music talent and we’re looking forward to once again supporting and celebrating one of these incredible artists next year.”

An academy of all current members of IMNZ, musicians, and music industry personnel vote to produce the shortlisted finalist albums. Next, an independent panel debates and scrutinises the shortlisted albums to decide the winner. That panel comprises musicians, journalists, and music industry professionals with a wide variety of different backgrounds and personal tastes.

The NZ On Air Outstanding Music Journalism Award debuted last year as the first of its kind for Aotearoa/New Zealand created in the spirit of legendary broadcaster Dylan Taite and to  extend IMNZ’s mandate to celebrate those who give media space to music from Aotearoa. The ground-breaking addition to the Taite Music Prize for 2022 celebrates special individuals who made a creative contribution and significant impact with coverage of Aotearoa music in the previous calendar year.


For the award’s inaugural year, finalists were shortlisted by the IMNZ board, and the finalists were of the highest calibre including; Undertheradar.co.nz ’s editorial team, Chris Cudby and Annabel Kean,   Rova’s 'Aotearoa Hip Hop: The Music, The People, The History' - Podcast creators; DJ Sirvere and Martyn Pepperell, 95bFM’s Long Player “Milk III - Reuben Winter” episode - Producer; Jess Fu and the 2022 recipient was producer and journalist; Tony Stamp of RNZ Music’s The Sampler. Alison Mau was extended a special commendation for her work for Stuff covering NZ music industry practices and sexual harm prevention.


The NZ On Air Outstanding Music Journalism Award comes with a $2500 cash prize. It is open to nominations from NZ music journalists, bloggers or editors who have made a creative contribution and significant impact in truth-telling and innovative reporting in the Aotearoa music industry.

The Taite Awards ceremony also includes the Independent Music NZ Classic Record presentation. This award acknowledges one New Zealand record released over 20 years ago on an independent label. These records, whether a 12”, a compilation, EP, or full-length album have become quintessential gold nuggets of our musical history and have included Patea Māori Club for 'Poi E', The Clean’s Boodle Boodle Boodle and Upper Hutt Posse’s E Tū.

The Independent Spirit Award will be in its fifth year in 2023. Devised to recognise and celebrate someone passionate about NZ music; who's ahead of the game in creativity, diversity, and imagination; and has dedicated themself to helping artists or music people to grow and find their unique pathways. The Board of IMNZ determines the annual recipient.