We're thrilled to announce the 20 songs in contention for the 2020 APRA Silver Scroll Award. All APRA members are now invited to vote for their top five songs, and their votes will determine the five finalists and winner. 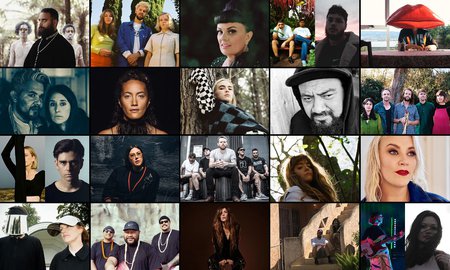 This Top 20 list was chosen from over 200 entries by a judging panel of 10 fellow songwriters, who have each made wonderful contributions to the NZ music community.

The judging panel were (in alphabetical order):

All APRA members are now invited to vote for their top five songs from this list of 20.

These votes from the APRA membership will determine the five finalists and winner of the 2020 APRA Silver Scroll Award.

You can listen to a Spotify playlist of all 20 songs HERE.

You can read more details on judging and voting processes for the Silver Scroll Awards HERE.

“We’re thrilled to find that there are plenty of established songwriters who are still surprising and delighting with their work, finding new stories to tell, and new ways to tell them. We’re also very excited to see so many new songwriters bringing fresh ideas and sounds to the landscape of music in Aotearoa” says APRA Head of NZ Operations Anthony Healey.

“Of course it was a tough job for our judging panel to select these 20 songs from all the entries, and there are plenty of songwriters who missed out, who continue to create great and valuable work. The standard of songwriting we’re seeing in New Zealand is incredibly high, and we applaud everyone for their craft.”

The APRA Silver Scroll Award will be presented at the Auckland Town Hall on Wednesday October 14. The other awards presented on the night are: