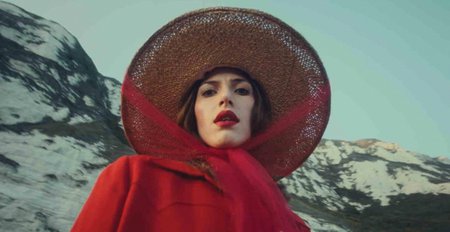 Aldous Harding's long-awaited third album, Designer, is finally here via 4AD/Flying Nun and critics around the world have rejoiced. Both The Skinny and The Independent in the UK gave the album a 5-star review while Rolling Stone, The Guardian, NME, Pitchfork all issued 4 out of 5-star reviews with plenty of praise. Stereogum also named Designer their Album of the Week and NPR named it among the 10 Best Albums Of April, saying Designer is "the audio equivalent of a Picasso; both dramatic and imaginary". Don't just take their word for it though, hear Designer for yourself here.

Prior to the album's release she unveiled the album's second single, 'Fixture Picture' and its stunning video. Stereogum and Paste Magazine both called the video "breathtaking".

Aldous will be performing across the UK and Europe this month but many of the shows have already sold out! But if you've missed out this time, never fear as she's set to return to the region later in the year.

Hawkes Bay's Connan Mockasin just released a song 'Bad Boys' with MGMT frontman, Andrew Van Wyngarden via Mexican Summer. The song is for the soundtrack of upcoming surf film Self Discovery for Social Survival which will also feature three other songs from the collaborative duo. The track scored features on Pitchfork, Consequence of Sound, Stereogum and even made The Fader's 20 Best Rock Songs Right Now list last week.

Conan was recently interviewed by Japan Times ahead of his debut show in Japan (where he now resides) on 13 April. The shows continue across North America, the UK and Europe from this month through August.

You know you've made it in pop music when one of the biggest pop stars in the world wants to write a song with you! This dream recently became a reality for kiwi songwriter Joel Little. On 26 April, Taylor Swift released the lead single from her upcoming album, 'Me!' featuring Brendon Urie from Panic! At The Disco, which has clocked up a whopping 122 million views on YouTube in it's first six days.

These days, Little is often working with the biggest and brightest stars of the Top 40 charts - to name just a few, he's also written and produced for US artists Khalid, 6LACK and Imagine Dragons, the UK's Sam Smith, Ellie Goulding, Marina (formerly Marina & The Diamonds) and of course, fellow New Zealanders BROODS and Lorde (who he shares a Grammy with)!

Not only are the UK getting a good dose of Auckland rap duo Church & AP with plenty of airplay on BBC Radio, they're also reaching the furthest corners of the world via Apple Music.

You can hear 'Magic Johnson' on their new double EP Cathedral / All Purpose, which is now available to purchase or stream all across the internet.

All proceeds from the shows went to the Our People, Our City fund to help the people affected.

After nine weeks, Drax Project are holding strong on the USA Billboard Pop Top 40 chart at #33 with their track ‘Woke Up Late’ featuring Hailee Steinfield. The music video, starring the immensely popular YouTuber Liza Koshy, was uploaded on YouTube three weeks ago and has already clocked up over 8 million views.

You’ll find the song all over on radio charts in the US, and it is in the Shazam Top 200 Popular Songs chart for America, which measures the amount of people who have used the music recognition app to find out the name of the track.

‘Woke Up Late’ is making waves in Australia too, with the track currently climbing the ARIA Charts in Australia, sitting this week at #23.

Unknown Mortal Orchestra rocked both weekends at Coachella in the US last month. Don't believe us? Check out their superb performance of 'Can't Keep Checking My Phone' via the festival's Youtube channel.

Need more proof of their excellent live show? The Daily Emerald wrote a rave review of their show in Eugene, Oregon. Still not convinced? Well, you'll have to see for yourself when they hit the road again in June. Dates have already been announced for the USA and Japan.

For insight into the mind of frontman, Ruban Nielson, take a look at his interview with KCPR.

It's also been announced a brand new track of theirs will be on the Adult Swim Network (Rick & Morty, Robot Chicken) compilation Metal Swim 2 out 3 May.

And last but not least, Alien Weaponry are finalists in the UK's Heavy Music Awards. To vote for their victory in the Best International Breakthrough Artist category, head to https://vote.heavymusicawards.com/. Voting closes 27 June.

Avantdale Bowling Club aka Tom Scott took out the prestigious 2019 Taite Music Prize last month, an award that recognises outstanding creativity in an album for his eponymous 2018 album.