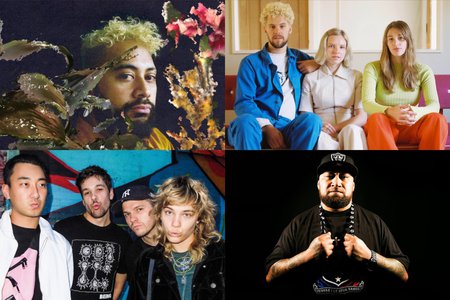 5 July saw Noah Slee release his first new single in two years ‘Soulflower’ via HAVELU Records. The song has since received radio play on KCRW in the USA, BBC Radio 1Xtra in the UK and Triple J in Australia - just to name a few.

In the online sphere, Noah performed an acoustic version of the song for Clash Music. The song was featured on RNGLDR who called the track “one of the more exciting singles of the Summer… [proving] that neo-soul is still running 2019’s greater direction with brash individuality and never-ending experimentation.” NY’s Elicit Magazine also had kind words, saying that “his smooth, soulful vocals are the centrepiece of this latest offering, complemented with lush harmonies and beautiful falsetto". Germany’s Kaltblut Magazine even called it their #MondayMood!

It was also added to Spotify’s Butters playlist as well as playlists by COLORS, Australian producer Flume, and US selecters Soulection.

People have heard Aldous Harding’s music, now it seems they want to know more about the artist herself, such as Zachary Fine of The Paris Review who published a thoughtful feature about her in July. To satisfy the intrigue, The Sydney Morning Herald and Irish Times both published interviews with Aldous.

Aldous is currently finishing up her summer festival run across the Northern Hemisphere and recently performed at the British Summertime Series at Hyde Park in London (the photo above is by Ben Bentley for NME’s photo diary).

In other news, her album Designer made Rolling Stone's 50 Best Albums of 2019 So Far and the song ‘No Peace At All’ from her debut album recently featured in an episode from the final season of Orange Is The New Black on Netflix.

LEISURE released their sophomore album Twister on 26 July, and Australia is loving it to say the least. The band were interviewed by both Pilerats and Scenestr and they've also been getting airplay across Triple J. In The USA both Ones To Watch and The Hype Magazine  published features about the release.

While in New York in June for her first US shows, fast rising star Benee also stopped by the VEVO studios to do a couple of beautiful stripped back performances of her tracks ‘Glitter’ and ‘Want Me Back’.

On 16 July Miss June released their new single ‘Enemies’ and it immediately generated a whole lot of attention, being featured on The Line Of Best Fit, Complete Music Update, Louder Than War, Hysteria Mag, Vulture Hound as well as making Best New Songs playlists on Alternative Press and Brooklyn Vegan. The 405  and BTRtoday also interviewed the band.

The single's appearance coincided with the announcement of their debut album Bad Luck Party, which will be released on 6 September  via Frenchkiss Records. We can’t wait to hear it! (Photo credit: Elena Childers)

The UK’s Line of Best Fit and Australia’s Pilerats were all over Mermaidens new single 'I Might Disappear', which came out 1 July on Flying Nun Records.  It was also added to the MTV Australia Upload Weekly playlist.

Fans in both territories can catch them before the end of the year as they’ll be showcasing at BIGSOUND next month, before returning to Europe and the UK for a 16-date tour.

‘I Might Disappear’ is the second single from their upcoming third album, Look Me In The Eye which will be released worldwide on 6 September and is available now for pre-order.