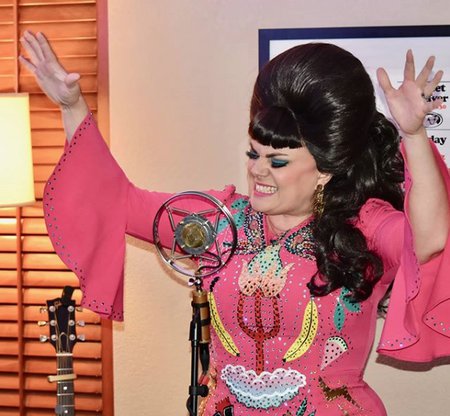 NZ @ Folk Alliance 2020
We’re proud to have witnessed yet another round of brilliant NZ artists showcase at Folk Alliance International last month, which this time took place in New Orleans. Tami Neilson (pictured above, credit: Kim Reed) and Troy Kingi attended as official showcase artists and, while Eden Iris, George Jackson and South For Winter all performed as well. American Songwriter praised Tami’s “powerhouse performances”, and we’re looking forward to seeing what opportunities come from the conference for our Kiwi artists.

NZ @ SXSW & The Great Escape 2020
If you're heading to SXSW this year and hoping to enjoy some music from Aotearoa, you're in for a treat! Announced so far to join Merk, P.H.F and Purple Pilgrims on the line-up of NZ artists showcasing at SXSW in Austin, Texas this year are A Low Hum, CHAII Hera, Holly Arrowsmith, Lake South, Nadia Reid, Reb Fountain and Yumi Zouma.

The NZ artists attending The Great Escape in Brighton, UK this year have also been announced. These are BENEE, Merk, Miss June, Molly Payton and Purple Pilgrims.

We are buzzing for these artists to showcase their talents to the world! Check next month's newsletter for the final details of the official NZ showcase at SXSW and the full NZ line up.

Tami Neilson - 'You Were Mine'
Adding to the buzz surrounding Tami Neilson at Folk Alliance, Tami also released her new single ‘You Were Mine’ and Rolling Stone called it one of their 10 Best Country/Americana Songs to Hear Now. Billboard are fans too! Watch Tami and her brother, Jay Neilson, perform the song live for Sirius XM Canada here! The track is on her upcoming album Chickaboom! which is set for release on 14 February and MOJO and No Depression are both saying amazing things about it. MOJO gave the album a 4 out of 5 start review, saying “her huge, one-of-a-kind voice has the ability to sting, seduce or soothe”.

BENEE goes viral + new video
BENEE’s single ‘Glitter’ is blowing up after becoming the soundtrack of a popular dance craze on the app TikTok. Over half a million videos have been made using the song on the app, and that’s helped bump Spotify streams of the song up to over 30 million in a short amount of time. Going viral aside, BENEE also released a video for her single ‘Blu’ in December, she was interviewed by Pigeons & Planes and she performed ‘Glitter’ and a cover for Triple J’s Like A Version.

Montell2099 signs to US label, Sable Valley
In December, local trap artist Montell2099 was announced as one of the latest signees to US label Sable Valley, started by US artist RL Grime, who Montell recently supported on tour. He was also commissioned for an official remix of UK artist Charli XCX’s track ‘2099’ featuring Troye Sivan.

Lorde sweeps Best of the Decade lists
Both Lorde’s albums have received a lot of love on Best Of The Decade lists. Her 2017 album Melodrama made #2 on NME’s Greatest Albums of The 2010’s list, #7 on Rolling Stone’s list, #8 on Independent and #14 on Pitchfork, while her 2013 debut album Pure Heroine made #40 Billboard’s list, #45 on NME’s list and #50 on the Geniuscommunity’s 100 Best Albums of the 2010s. A couple of her singles made a few Best Songs of the Decade list too with ‘Royals’ placing at #6 on Billboard’s list, and in the top 50 on the lists from Rolling Stone, Stereogum, Pitchforkand NME. The NME also named ‘Green Light’ their second Best Song Of The Decade, while Stereogum, Consequence of Sound and Pitchfork all had it in their top 50. If this is the influence Lorde’s had with just her first two albums, we can’t wait to see what she has in store for us in the new decade!

Yumi Zouma announce new label and album
Yumi Zouma have shared their first releases on new US label, Polyvinyl - ‘Cool For A Second’ and ‘Right Track/Wrong Man’, which were beloved by FADER and Stereogum respectively (among many others). The tracks will be on their upcoming album, Truth Or Consequences which will be released via Polyvinyl on 13 March.  Both tracks are available on all streaming platforms now.

MELODOWNZ - 'No Mercy'
Melodownz released ‘No Mercy’ featuring US rapper Denzel Curry on 6 December last year via Def Jam AU/NZ & SNIFFERS Records. Brooklyn Vegan and Earmilk both featured their song up on their sites and Hot New Hip Hop submitted it to their community which earned it a ‘Very Hottttt’ rating from their users and editors alike. ‘No Mercy’ is available now on all streaming services.

Jonathan Bree
More and more is being revealed about the man behind the mask, Jonathan Bree, with further interviews with The Line Of Best Fit and American Songwriter. Bree’s upcoming fourth album is set for release this year. We’ll be sure to keep you in the loop! In the meantime, Jonathan Bree will be returning to Europe this April for a string of headline shows.

Aldous's Designer one of "Best of 2019"
You may not be surprised to know Aldous Harding’s third album Designer has made even more lists from various publications for their Best Albums of the Year. Designer came in at #5 on NPR’s list, #24 on The Guardian’s, #30 on Clash Magazine’s and #39 on Pitchfork’s. Her single, ‘The Barrel’ also made #73 on Billboard staff’s 100 Best Songs of 2019. Harding returns to perform in Australia later this month before a run in a New Zealand and we expect the touring won’t stop there. For a taste of what an Aldous Harding show is like, God Is In The TV reviewed her sold out show at the 1,700-capacity Roundhouse in London last December.

Listen to a playlist of the songs and artists featured in this month's newsletter on Spotify or Apple Music.