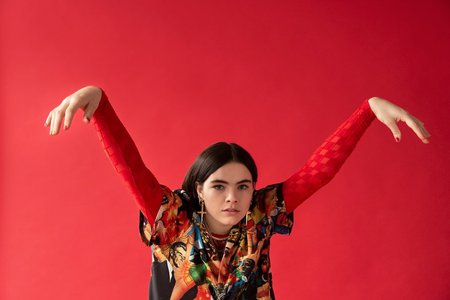 Aldous Harding
Aldous Harding made her US TV debut last month, performing ‘The Barrel’ on The Tonight Show starring Jimmy Fallon. Designer, her recently released album from which ‘The Barrel’ is the lead single, continues to gain praise with both NPR and The Guardian naming it one of the of Best Albums of 2019 So Far. The good press keeps coming too, with Bandcamp naming Designer their best album of Spring 2019, and Gorrilla vs Bear have 'The Barrel' at #2 on their list of best tracks of the year so far, and the album Designer at #6.

Aldous is currently on the festival circuit in the UK and Europe, before she returns for a run of shows across Australia and New Zealand in late August. She has also just announced her North American headline tour which will commence in September. Tickets to Aldous' European shows sold like hotcakes, so if you’re looking to see her majestic performance in person, be sure to book quick!

Myele Manzanza
Myele Manzanza released his new album A Love Requited via UK label First Word Records on 28 June.  The buzz surrounding the record came from a variety of outlets across the net, with The Vinyl Factory premiering the first installment of his Surgery Sessions, Complex UK premiering a song from the album called ‘Big Deal’, and Bonfide Magazine interviewing the man himself.

Earth Tongue
Wellington psych duo Earth Tongue released their debut album Floating Being on UK label Stolen Body Records on 21 June.  Straight off the bat,  the UK’s Louder Than War were big fans, giving the album a rave review with a 9 out of 10 rating. BBC Radio 6’s Stuart Maconie also named their single ‘Microscopic God’ one of his favourite tracks from 2019 so far on his Freak Zone show. Earth Tongue are currently wrapping up their tour of continental Europe before they head over to the UK for a five-date run.

Drax Project
While Drax Project’s single ‘Woke Up Late’ featuring Hailee Steinfeld still sits pretty at #22 on the Australian singles chart - and has even gone double platinum there! -  the Wellington quartet have released their new single ‘All The Time’, catching the attention of Alternative Press in the US and landing them interviews with BBC Music and Wonderland Magazine. Watch the lyric video for ‘All The Time’ here, and if you’re in Europe and desperate to catch them live soon, they’ll be supporting the legendary Christina Aguilera in France, Belgium, Netherlands and Germany next week!

BENEE
If you hadn’t heard of BENEE at the beginning of June, we sure hope you have now. Not only did she play her first shows across Europe, the UK and USA last month, she also released a new single ‘Want Me Back’ - much to the delight of Analogue Trash and Wolf In A Suit - in the lead up to her debut EP FIRE ON MARZZ via Republic Records on 28 June. Triple J were all over the EP immediately, Happy Mag named it one of the Five Best New Releases  and Wonderland Magazine even had a little chat to her too.

Alien Weaponry
If the reviews from Denmark’s Metal Day, the UK’s Distorted Sound, Ireland’s Overdrive - and the above picture of the crowd Alien Weaponry drew to the Main Stage at Hellfest in France last month - are anything to go by, it looks as though the Waipu metal band and their fans are having a wicked time on their current European tour. And if that’s not enough to have you convinced, watch this powerful video of Kane Harnett-Mutu teaching a haka to their massive audience at Copenhell in Copenhagen, Denmark.

Fans across the globe may have spotted them recently on CNN in a feature with Rick Damigella about the "teen trio" playing Māori metal.  They have also been in the US at festivals like Chicago Open Air and playing many headline shows.  Stateside metalheads can look forward to Alien Weaponry’s return for another North American tour with  Black Label Society and The Black Dahlia Murder from September this year.

Louis Baker
Back in the first week of June, Aussie site Pilerats premiered Louis Baker’s live performance of his single ‘So Lo’ in anticipation of his new album Open which dropped on 21 June.  The much-anticipated release of Open, via Ditto Music, was accompanied by a video for the titular single, which premiered on Clash UK.

Open is available now to stream on all platforms, and for purchase on Bandcamp. If you like what you hear, he’s recently been announced as the support act for NZ-born Jordan Rakei on his Australian tour this August,  followed by an appearance as an official showcase artist at BIGSOUND in Brisbane this September.  Louis will be following up these performances with a few shows in Europe later that month.