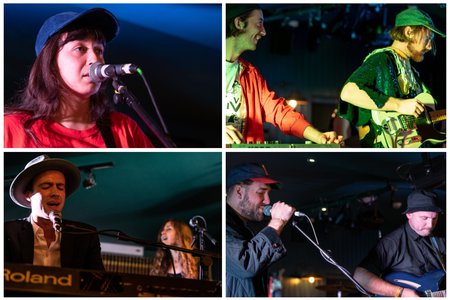 New Zealand certainly made a splash at The Great Escape in Brighton, UK last month with a solid contingent of delegates and a superb line-up of local artists performing at the NZ Music Commission’s showcase. Finn Andrews, Soaked Oats, LEISURE and The Beths put on an awesome show that at times had a massive queue down the pier of people waiting to catch a peek at some of the best talent Aotearoa has to offer.  All the NZ artists had great official showcases, including Robinson and Drax Project who were also in Brighton for the festival. Overall, the conference audiences had a great time, and we're holding out to see some see some awesome growth in the international careers of our performers and delegates as a result.

Off the back of their signing to French Kiss Records, Miss June have already got some massive exposure with their new single ‘Best Girl’ which premiered last week on BBC Radio 1’s Indie Show with Jack Saunders and was added to the New York Times Playlist alongside the likes of superstars Cardi B and Katy Perry.

Miss June will be playing their first ever shows in the UK and the USA this month. For an idea of what to expect, Tonedeaf wrote a rave review of their set supporting Ruby Fields on her current Australian tour.

It seems every time Alien Weaponry do anything, the online metal community are all over it and the release of their music video for their latest single, ‘Ahi Kā’ is no different. Both Revolver Mag and Loudwire both published posts celebrating the single and this time the buzz even extended to Billboard.

The Waipu thrash-metal trio have also certainly intrigued San Francisco, with features on both CBS San Francisco and the San Francisco Examiner in the lead-up to their headline show there last month.

The lead single form Benee’s forthcoming EP, ‘Evil Spider’ premiered on Triple J and has since garnered attention from Australia’s Purple Sneakers, Idolator and Flaunt in the USA and the UK’s The Times. Los Angele’s Ones To Watch and iD UK also added Benee to their new music playlists. If you’re in the Northern Hemisphere and like what you hear, she’s performing live in the UK, the Netherlands, Germany, Sweden and the USA all this month!

The world wide web is still a-buzz with the release of Aldous Harding’s third album Designer via Flying Nun Records/4AD. The Quietus called the album “mysterious, complex and intelligent work”, Rolling Stone listed it as one of the best albums of April and Billboard took that one further naming it one of the Best Albums of 2019 So Far. Bandcamp also landed an interview with her in the wake of the release.

Chart-wise in UK, the album reached #33 on the charts and hit #1 on the UK Record Store chart.

Watch LEISURE absolutely kill it with this live session of their single ‘On My Mind’ which premiered on Los Angeles site, Ones To Watch.

Billboard have continued to show love for Wellington’s Drax Project, following their charting hit ‘Woke Up Late’ featuring US star Hailee Steinfeld, by inviting them on to their Pop Shop podcast for an interview. They were interviewed for MTV UK last month too.

The music video for the track is a lot of fun and is closing in on 11 million views on Youtube in less than two months!

Auckland’s Church & AP released their new single ‘Dandelion’ on Friday, premiering on Complex UK and is available on all streaming platforms for all to listen to now. They’ll also be performing their first show abroad in the UK this month! Check our international gig guide (linked below) for details.

NPR have proven to be big fans of The Beths and the love continues with the World Café show hosting the Auckland band for a live performance of their hit ‘Future Me Hates Me’. Watch here now!

SACHI’s new single ‘Sparking My Fire’, featuring the Auckland Gospel Choir and Northern Ireland’s Roe, premiered on Billboard in May. The track is the lead single from their upcoming EP to be released via Casablanca Records on 27 July.

Congratulations to Devilskin who have signed to legendary booking agency X-Ray Touring. Founding member, Paul Martin says of the signing “Many of our musical heroes are on X-Ray’s roster, so it's an absolute honour for us to join them. We are absolutely fizzing to get on the road & hit some big stages.”

Finn Andrews released the music video for his single ‘One By The Venom’ on April 30, receiving plenty of coverage across the internet including from Hot Press, North America’s Under The Radar Mag, Fortitude Magazine and 1883 Magazine with an accompanying interview. Peep the video at any of these links!

Finn’s debut solo album One Piece At A Time is out now via Best & Fairest.